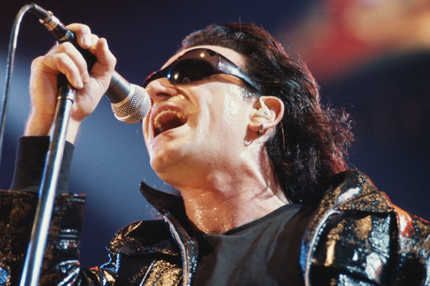 It’s the 20th anniversary of U2’s landmark 1991 album Achtung Baby – and to celebrate, Bono and the boys are offering fans quite the present.

On October 31, The Biggest Band On Earth will drop 20 Years of Achtung Baby, a massive boxset with six CDs and four DVDs. The goods include a remastered version of the namesake album and its 1993 follow-up Zooropa, plus five 7-inch singles, previously unheard songs from the sessions, the ZOO TV: Live from Sydney concert movie, and a new documentary about the LP, From the Sky Down, directed by Oscar-winner Davis Guggenheim (Waiting for Superman, An Inconvenient Truth). Also: a pair of Bono’s black bug-eyed “Fly” sunglasses — see ‘em in action in the “Even Better Than the Real Thing” and “The Fly” videos below.

The boxset will arrive in five different formats with the deluxe editions also featuring a hardback book and prints of the album cover art. See details at achtungbaby.u2.com.

SPIN named Achtung Baby, U2’s seventh studio effort, the No. 1 album of the past 25 years. Recorded over six months at Hansa Studio in Berlin, a former SS ballroom near the reopened Berlin Wall, and Windmill Lane in their hometown Dublin, the LP has come to define the Irish band’s artistic peak.

“[Achtung Baby] would energize their career and genetically engineer rock music into the hybridized mutant we know today,” said SPIN editorial director Charles Aaron. “[It’s] U2’s most immediately dynamic music since 1982’s War, and its most emotionally frank songs to date, capturing that particular early-’90s rub of boundless possibility and worn-down despair…. U2 became the emblematic band of the alternative-rock era with Achtung Baby. Struggling to simultaneously embrace and blow up the world, they were never more inspirational.”

U2, “Even Better Than the Real Thing”