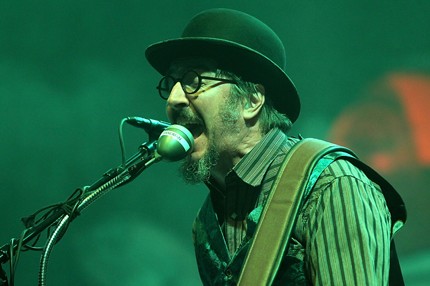 It’s been 11 years since Les Claypool released a studio album with his band of merry pranksters, Primus. That hiatus ends on September 13 when they drop their seventh album, Green Naugahyde. SPIN has the exclusive premiere of the album’s first track “Tragedy’s A-Comin'”:

The tune is an art-funk monster – and might be the hottest thing they’ve done since their 1995 breakthrough smash “Wynona’s Big Brown Beaver.” Claypool and longtime guitarist Larry LaLonde, who have reunited with drummer Jay Lane after his split in 1989, lay down a searing groove anchored by Claypool’s slap-funk bass lines. (Dude’s still the Jaco Pastorius for the Phish-going set.) But there’s darkness to the booty-shaking fun, as Claypool delivers lyrics about a bible-thumping chick and the end of the world.

“Lyrically, this is me focusing on eventual demise or at least the notion that big rain is coming and at some point I’m going to get pretty fucking wet,” Claypool tells SPIN. “Who says lemmings can’t dance as they go over the cliff?”

Dancing aside, Primus will head out for a fall tour in September – check out dates – and while they’ve toured on-and-off the last decade, Claypool says some recent time apart has renewed his passion.

“Primus had hit the creative wall by the end of the ’90s and Primus needed to sit. Like a good compost, we needed to ferment and turn the manure and garbage into fine, nitrogen rich dirt.”