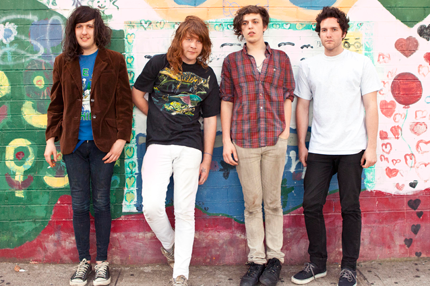 The Massachussetts-based group DOM broke out as one of indie-pop’s best new bands with their 2010 debut EP Sun Bronzed Greek Gods, which boasted awesome art-damaged anthems like “Living in America.” They’re back again with a second EP, titled Family of Love (out August 9). And while the group’s single-named, red-headed leader Dom mines similarly scuzzy, synth-powered psychedelia, he’s upped his game a bit: He retreated to Brooklyn’s Rare Book Room studios to produce the set with Nicolas Vernhes (Björk, Animal Collective, Deerhunter).

SPIN has the week-long exclusive stream of Family of Love – use the player at right – and also caught up with Dom to talk about the recording, his Mariah Carey obsession (honest), and the band’s plan for their next release.

You started out writing music in your bedroom, but teamed up with a pretty big producer for your second release. Was that weird for you?
No, it wasn’t weird. It was fun. I loved what Nicolas did with Animal Collective and Deerhunter, and was really excited to work with him. We learned a lot when we were there – all these cool and different recording techniques.

The album features you playing a fun machine, and a solo performed using the tones of a telephone keypad. Were those your ideas?
The telephone was my idea. I was thinking, “What’s the cheesiest way I can sample a telephone aside from the ring?” And then that came up. A lot of the melodies and textures were meant to mimic the telephone experience but in a fun sort of way. It’s teeny-bop-meets-space rock kind of a thing. Mariah Carey, teen’d-up. Took some acid [laughs].

Are you a big Mariah fan?
She’s one of my major influences. I think the perfect example of her influence is a song like “Telephone.” I wanted to create something as lyrically effective as “Always Be My Baby” but at the same time having these really cosmic type elements that just sort of bring a dark insinuation.

“Some Boys” features guest vocals from a girl named Emma. Who’s that?
She’s one of my friends. She was playing that song one day on her keyboard and I thought it had a lot of potential so I asked her if I could rework it. She agreed and she sang on it. It’s a pretty fun song.

So you’re still in debt?
Even more so than before. It’s expensive being in a band.

Most musicians earn money these days by touring, but you guys haven’t really been hitting the road that hard. How come?
I’m not really sure. I really like being on the road. We’d rather be doing this all the time than having nothing to do.

With this EP out, are you already working on your next release?
We’ve been recording a lot with plans to put out a double album by next May. But ot’s going to be so long since we’ve put out music, so who knows – we may have a box set by then.