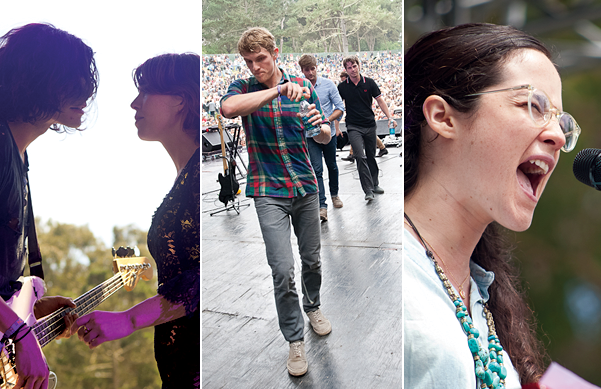 Some of the hottest acts around descended on San Francisco's Golden Gate Park for the Outside Lands Music and Arts Festival last weekend. Among them were Los Angeles' breakout popsters Foster the People, Mexican singer-songwriter Ximena Sariñana, and L.A.-based freak-folk quintet Grouplove. SPIN contributing photographer Wilson Lee tagged along, shooting all aspects of the festival.

"It was an eye-opening and amazing experience to get such intimate access to these artists," Lee tells SPIN. "You get a real look at them as rock stars and as regular people and music fans."

SKIP AHEAD TO XIMENA SARINANA >>

SKIP AHEAD TO FOSTER THE PEOPLE >>

Some of the hottest acts around descended on San Francisco's Golden Gate Park for the Outside Lands Music and Arts Festival last weekend. Among them were Los Angeles' breakout popsters Foster the People, Mexican singer-songwriter Ximena Sariñana, and L.A.-based freak-folk quintet Grouplove. SPIN contributing photographer Wilson Lee tagged along, shooting all aspects of the festival.

"It was an eye-opening and amazing experience to get such intimate access to these artists," Lee tells SPIN. "You get a real look at them as rock stars and as regular people and music fans."

SKIP AHEAD TO XIMENA SARINANA >>

SKIP AHEAD TO FOSTER THE PEOPLE >> 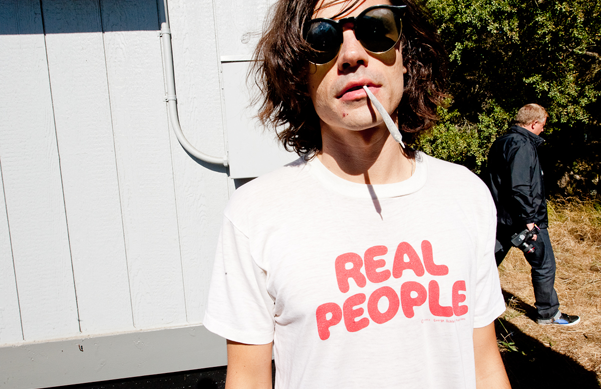 What's a visit to Golden Gate Park -- the epicenter of the '60s hippie counterculture -- without smoking a joint the size of your finger? "[Frontman] Christian Zucconi started rolling it during an interview," says Lee. "He was about to spark it up, too!" 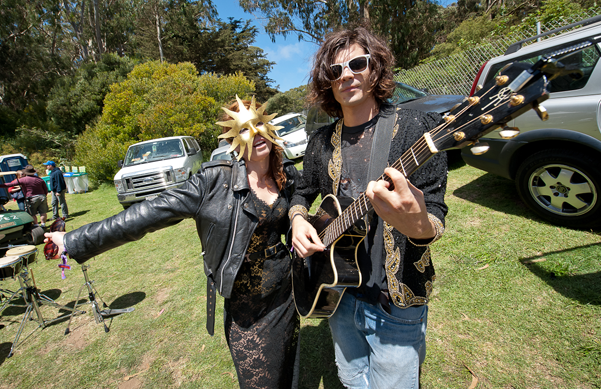 Grouplove singer-keyboardist Hannah Hooper (left) and Zucconi play around before soundcheck at the solar panel-powered Eco Stage. "Everyone was just hanging around backstage getting ready," says Lee. "They just started warming up, playing guitar and singing, when Hannah put this funny mask on. She said she got it for free at Lollapalooza the weekend before." 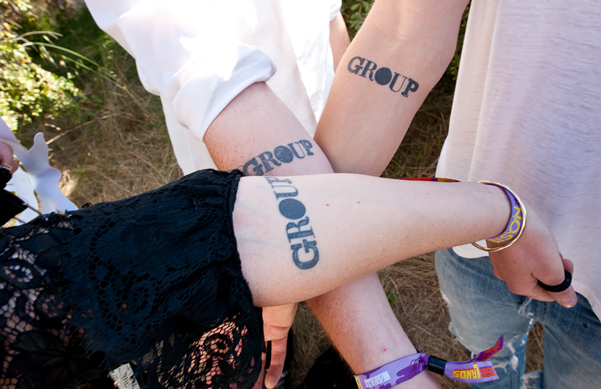 "Three of the band's five members have these tattoos -- Zucconi, Hooper, and bass player Sean Gadd," Lee says. "But they wouldn't tell me the story behind getting them!" 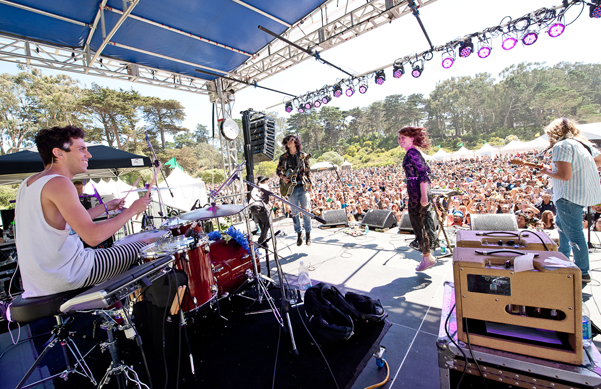 A prank briefly interrupted Grouplove's Sunday afternoon set. "Before the show they blew up giant balloons to release during the second to last song," explains Lee. "They filled them with water to keep them weighted down. But they couldn't find enough water, so they filled a select few with juice. When they released the balloons the wind picked up and blew them back towards stage. One balloon popped on Christian's face -- and it was filled with pineapple juice. It hit him right in the face. Luckily it didn't hit an amp instead." 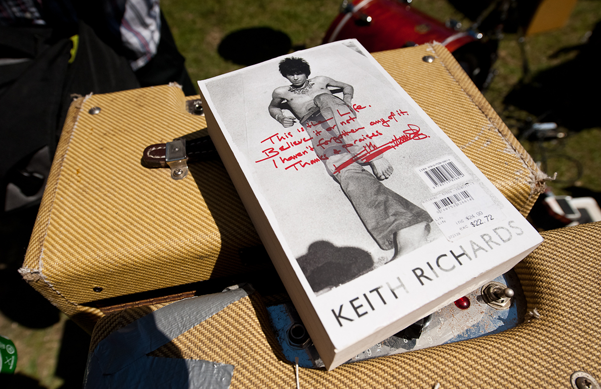 If you're going to be a badass rock star, you need tips from the pros. Guitarist Andrew Wessen turned to the Rolling Stones' legend Keith Richards, whose new autobiography Life recounts his tales of rock debauchery. "It's a little light reading," jokes Lee of the massive tome. 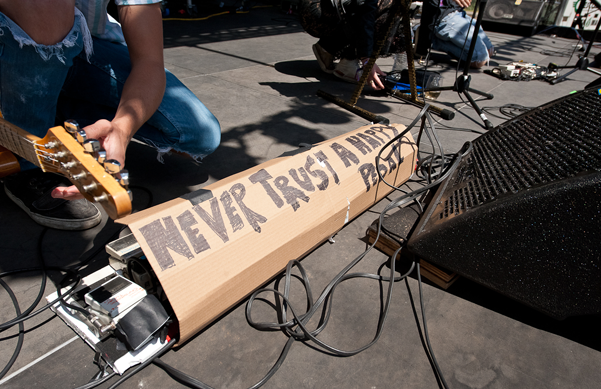 As a play on the title of their upcoming album, Never Trust a Happy Song, Wessen crafted a cardboard cover for his effects pedals. 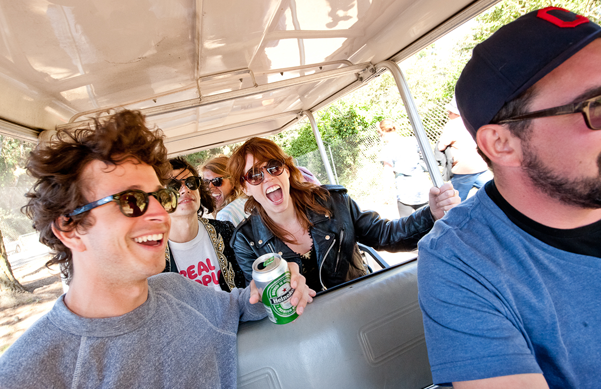 Grouplove rode a golf cart around Golden Gate Park after their set. "They were zipping all over the place, like over to the media area to do press interviews," says Lee. "During this shot I was sitting on the dashboard. It was really fun… until the golf cart died and we had to walk. Also, we could have driven to Hannah's childhood home -- she grew up just a few blocks from the park." 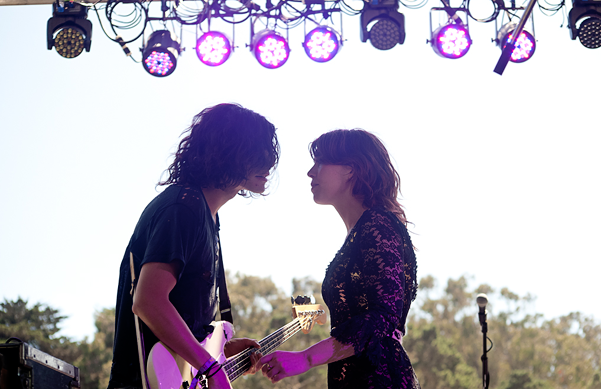 "They're having a tender moment onstage amid all the chaos of the show," Lee says of Zucconi (left) and Hooper, who are a couple. 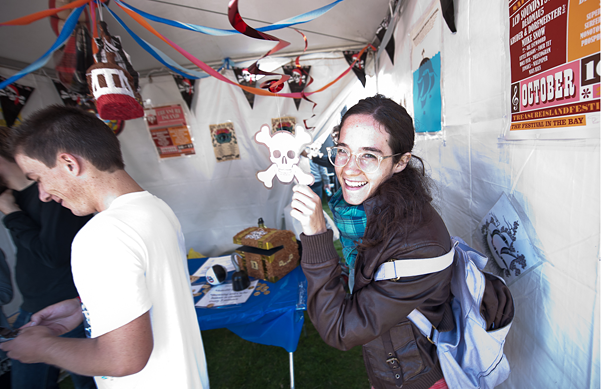 Ximena Sariñana is an actress and pop star in her native Mexico, but in America she's just starting to break out — after releasing her self-titled debut English-language album earlier this month. Before her Outside Lands set, Sariñana performed a warmup acoustic show in the American Express tent. "She was in the media area and only way to get backstage was thru someone else's booth, so we climbed through," Lee says of the above photo. "The booth was decorated with tons of skulls, like Day of the Dead style. Ximena loved them."

12.Meeting of the Minds 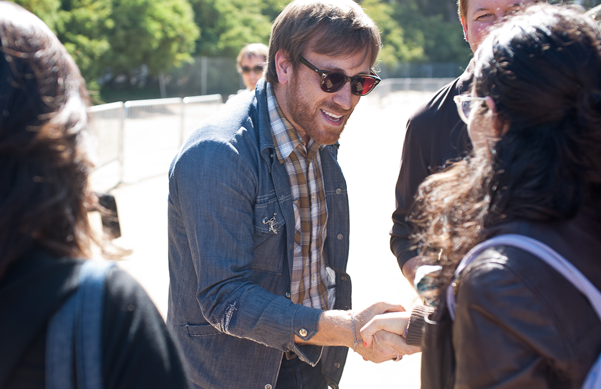 Sariñana is a huge fan of Ohio blues-rock duo the Black Keys and got to meet the band's frontman Dan Auerbach (left) backstage. "She was at the press tent and he was coming to do interviews," explains Lee. "She rushed over and introduced herself. She was really excited." 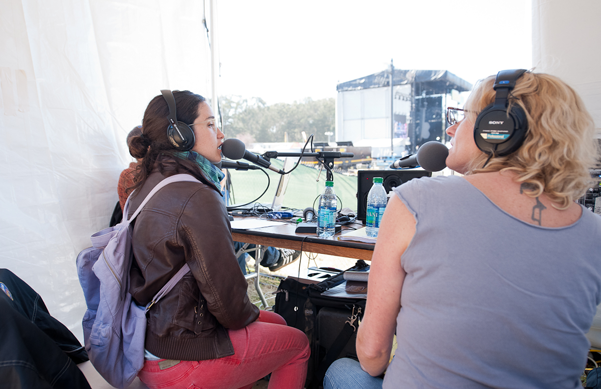 Sariñana sits down for an interview backstage. 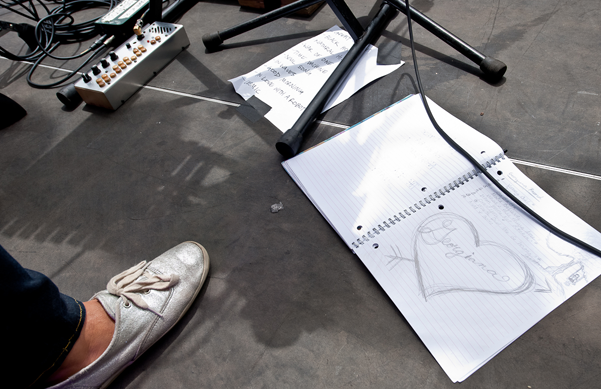 "This notepad belongs to Lauren, the touring xylophone player," Lee says. "I have no idea who 'Georgiana' is... but apparently she has a crush [laughs]." 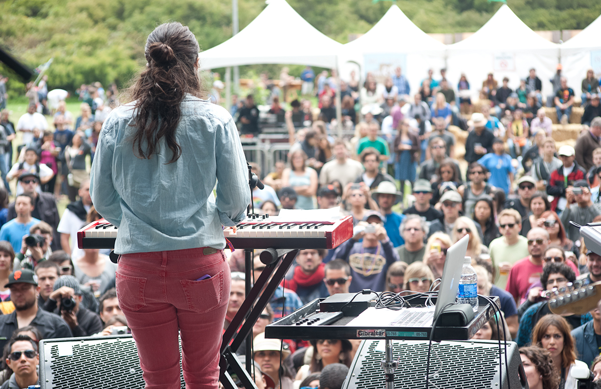 "It was a really cool set," Lee says of Sariñana's Saturday performance. "She doesn't have a very big fan base in the U.S. yet, so it wasn't a huge crowd. But the fans she did have new all the words. They were fanatical. Some hung around after the set just to tell her how much they love her." 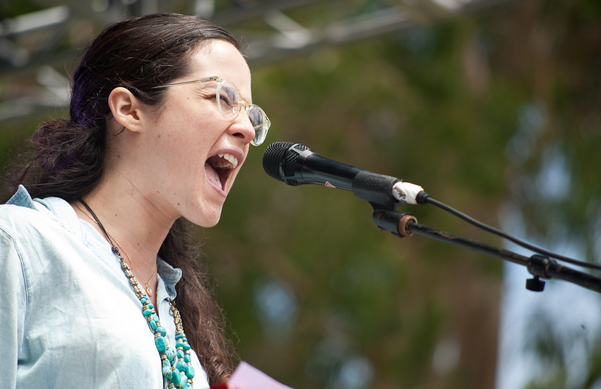 Sariñana sings to the audience in Golden Gate Park. 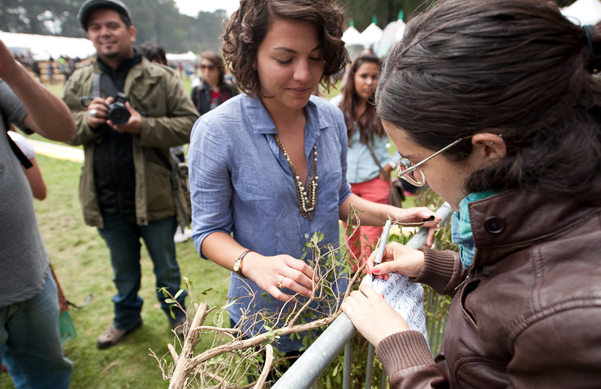 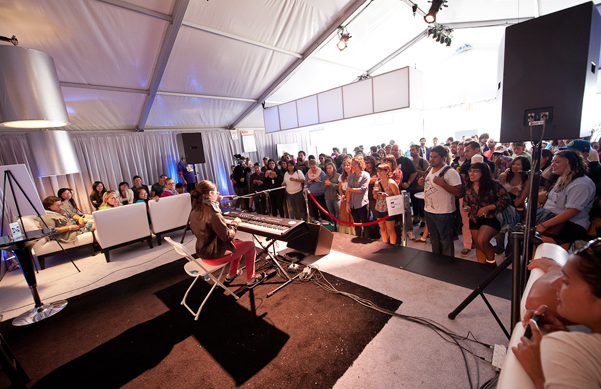 "She had been losing her voice all day," Lee says of Sariñana. "After her press interviews she stopped talking. She lost her voice. It was completely gone. We didn't hear anything out of her until this private solo set for American Express, and she wailed. It was fucking amazing. She went from silence to wailing. After that she was talking fine!" 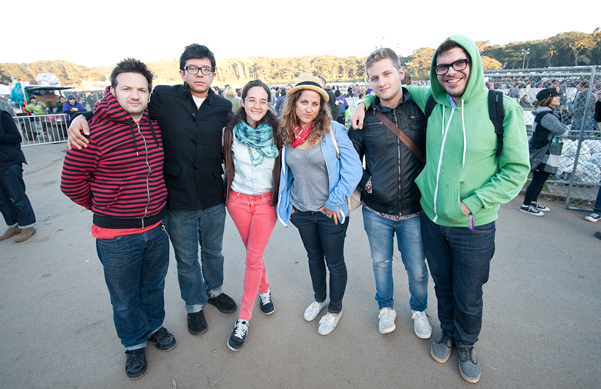 "Ximena wanted to do a full band shot. They just happened to all be together at the same time. They're really great, friendly people." 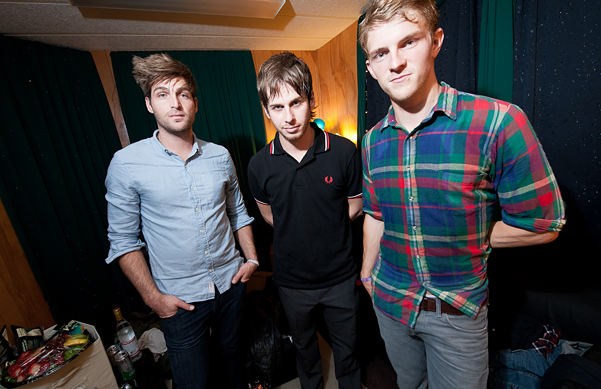 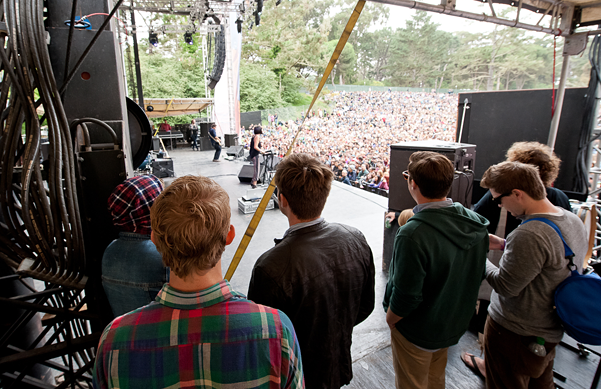 Foster the People watch Phantogram in action on the Sutro Stage, where the New York electronic duo performed before Foster. "The Foster guys said that they met Phantogram and became pals the weekend before at Lollapalooza," explains Lee. "The were really diggin' Phantogram's set." 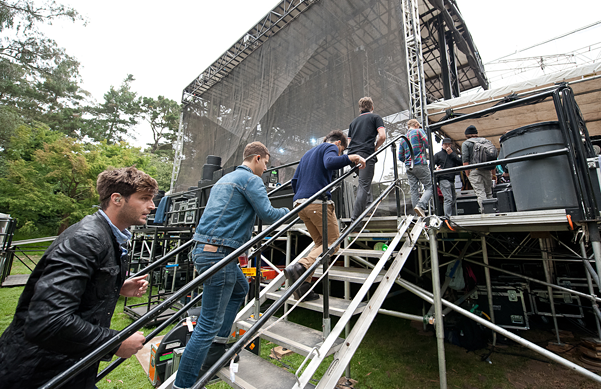 Foster the People climb onstage for their Friday afternoon set. 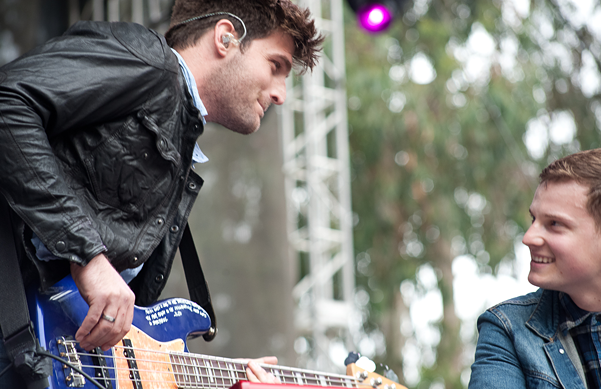 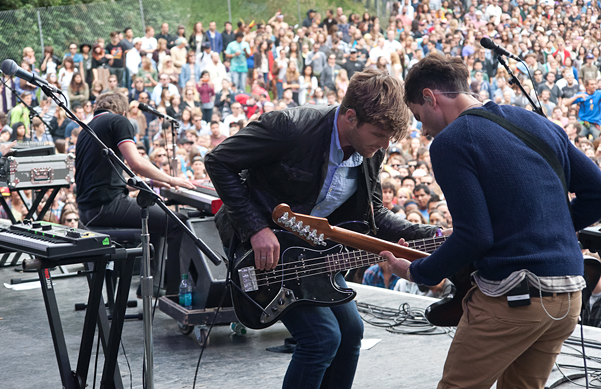 With Mark Foster leading on keys, the band -- seen here with their touring guitarist Sean Cimino -- locked in an indie-pop groove on songs off their debut album, Torches. They also covered Weezer's "Say It Ain't So" as a payback to Rivers Cuomo and Co., who covered their hit "Pumped Up Kicks" live the week before. "People went nuts," says Lee. 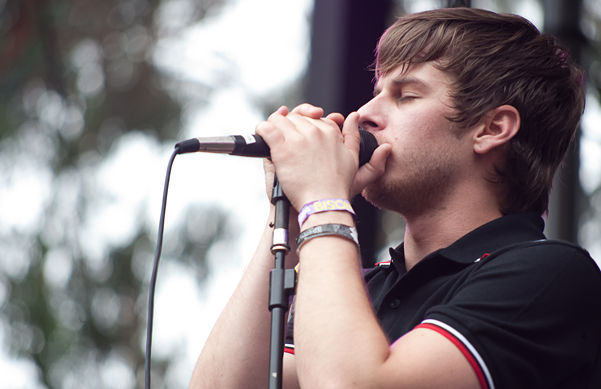 Mark Foster -- frontman and band namesake -- has "tons of energy," says Lee. "He sounded great and had the super huge crowd totally into it. They sounded true to the album's sound. Everyone I spoke to said it was one of the best sets of the festival." 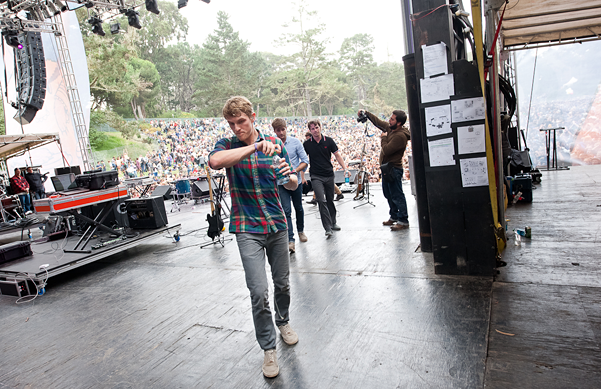 Foster the People wrap up their performance. "It was an amazing set and the crowd was HUGE," says Lee. "It was indicative of a band that's going to be huge, too." 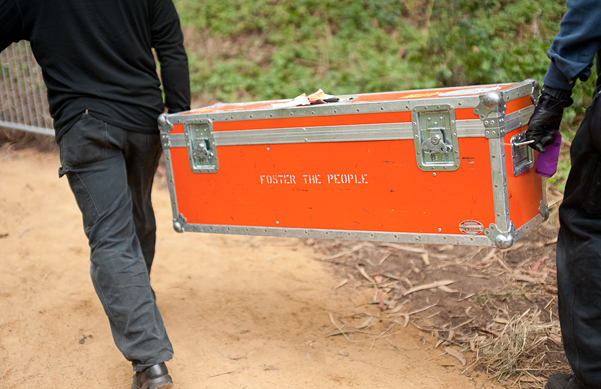 The band's equipment is taken to their bus. Foster the People will be on tour this fall. See their dates here.