IN THE STUDIO: The Black Keys

"It's the fastest we've ever played," singer-guitarist Dan Auerbach says of the blues-rock duo's seventh LP. 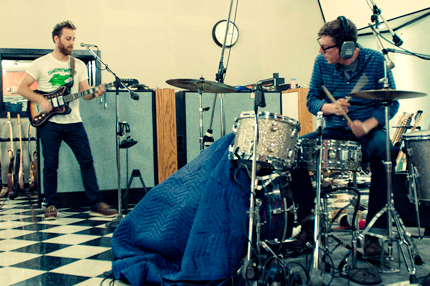 In the 16 months since the Black Keys released their last album Brothers, the blues-rock duo have toured the world, accepted three Grammys, played Saturday Night Live, rocked festivals like Coachella and Bonnaroo, and filmed a few videos, including the short film Howlin’ For You starring snowboarder Shaun White and Twilight’s Christian Serratos. Oh, and drummer Patrick Carney got engaged to be married.

Somehow they found time to record their seventh studio album, too.

“It’s the fastest we’ve ever played,” singer-guitarist Dan Auerbach says of the LP’s new songs, which he says were inspired by the Clash, the Cramps, and old rock’n’roll, rockabilly, and garage rock records. “The new album doesn’t sound like Brothers. It doesn’t have that open soul feel to it. It’s way more driving and the tempos are really fast.”

The yet-to-be-titled new record will be released later this year. It was recorded at Auerbach’s Nashville studio during breaks in the band’s schedule when their producer Brian Burton, aka Danger Mouse, could fly in. “He understands all the different kinds of music we’re into,” Auerbach says of Burton, who also helped produce their last two albums, starting with 2008’s Attack & Release. “He’s got really great ideas about melody and song structure. For him it’s all about the song.”

The album opens with “Lonely Boy,” which is “one of the first songs we recorded,” says Auerbach. “Almost every song on the record has a foundation of live drums and guitar together in the room. It’s guitar bleeding into the drum mics. It’s pretty raw.”

Of “Little Black Submarine” Auerbach says: “We recorded it four or five different times in different ways. We would start from scratch and then start over. The version that we ended up with is weird. It starts with just acoustic guitar and vocals and by the end it sounds like Black Sabbath!”

He says that the Keys were seeking a group groove: “I’ve never been into guitar solos. I really like when every instrument in the band is a rhythm instrument. This record has a lot of that going on — guitar, bass, drums, and keyboards all working together as a rhythm instrument. But unlike Brothers, which has more of these slower songs with an open feeling, [the new LP] is definitely fast.”

So fast, in fact, that the sound may be tough to recreate live. “Pat’s never played drums like this before — he’s never played this fast,” Auerbach says of his bandmate. “He’s definitely worried about being able to play some of these songs live.”

The Black Keys have only a handful of live gigs scheduled this summer, leaving them time to mix and master the album.