PLUS: Frontman Justin Pierre discusses the Minneapolis band's struggle to release the album without a label. 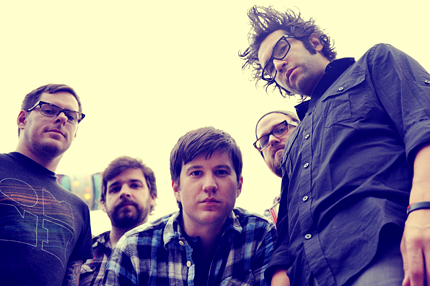 The band parted ways with Columbia Records in early 2011, so when it came time to record the new LP at their hometown Flower Studios this spring with producer Ed Ackerson (BNLX, Polara), the five members pried opened their own wallets. Now they have a new album and no way to release it… yet.

We caught up with singer-guitarist Justin Pierre, 35, who explains:

So what’s the plan for releasing the new album?
We have absolutely no idea [laughs]. But it’s coming out one way or another this year. We have so many options.

Oh yeah…?
We have a handful of songs we’re sending to various labels that have said they’re interested. Another plan is to put it out ourselves, if all else fails. Another plan is that since we paid for the recording, the next step is to pay for mixing, mastering, and manufacturing and then find somebody to just distribute it. Or we can find a label to help with manufacturing and sort of buy the record from us, then we’d work it together as a team. Another option is to sign to a label for this record and, possibly, even more records.

Last year’s My Dinosaur Life debuted at No. 15 on the charts — a career best. What happened with Columbia?
Well, I guess we didn’t do as well as they hoped or expected us to. And we felt that having all their resources at our disposal would perhaps propel us into another dimension. But we are what we are regardless of what label or machine is behind us. We did exceptionally well, though, if you want to look strictly at sales numbers in today’s climate.

Are you worried about recouping the money the band spent on the new record?
I definitely feel pressure on us for paying for the album ourselves. If it completely flops we’re in trouble. We won’t have any money. But, on the other hand, if it’s a success, we’ll make a lot more money.

What do you think defines this album musically?
For me it’s more of a reflective, whole-life experience from a certain age. I’m starting to think about more serious things than I did before. There’s still humor, but the heavier stuff on this record is even heavier and there’s a lot of it. I’ve just been overwhelmed with the eventual demise of everything.

What do you mean?
Everybody lives a finite length of time on this planet, and what do you do during that time? The fact that we’re a band — [lead guitarist] Josh [Cain] and I have been playing for almost 15 years — and that someday people won’t be interested in hearing what we do anymore. Nothing lasts forever; that’s one of the album’s themes. I’ve had a lot of time at home, the past five months or so, to just write and think, bounce ideas around in my head. Musically, I feel like the last record was us venturing off into new territory, but this one is us venturing even further.

What does the music sound like?
There are still some simple four-chord pop or rock songs, but there’s a lot of experimental, electronic noise as well. And for the first time we had string players come in and play. We had a violinist, a cellist, a viola. In the past we used samples, because it was a hell of a lot cheaper; you can definitely tell the difference between real strings and fake strings. We had one demo with vocals that we recorded in the back of our bus while touring. It had this hum and this buzz behind it — but it just worked. The other night we were finishing up a song and my vocal just wasn’t working. The lyrics were too gross and too personal. Josh said it literally made his stomach sick.

What was the lyric?
It was something about “rushing into every pore, the whiskey stench of open sores.” He didn’t really like that [laughs], so I changed it to “scattered seeds of sycamore,” which is a little prettier, more palatable. But I like when people react that way. That’s another thing with this record: I put my heart and soul into everything I do, so it’s hard when four guys are saying, “Let’s try something else.” But I’ve been more open to figuring out a way to make everybody happy as opposed to just me. I’m a very stubborn person. I like what I do and to be told to rewrite a song, I see as a challenge. The point is this: When I finished singing that song, I left but I forgot to finish a part. I ended up singing it into my computer and sending it to Ed. He slapped it on, added some reverb, and made it fit the song. Ed’s not trying to have everything perfect and wonderful. It’s okay to have mistakes and imperfections, rather than us trying to be perfect.

Tell us about some of the songs.
Well, none of the titles are final. But the one with strings we’ve been calling “Die” [laughs]. But it’s a very sad thing, actually. It’s about death. Or it’s a song about life, based around death. It sounds like the Smashing Pumpkins’ “Disarm.” I really like it.

I wouldn’t expect MCS to write a dark song called “Die.”
My grandmother died late in 2009 and it was the strangest thing. I was trying to go back to film school when we had this big break, this big opportunity. But I wanted to see her because I knew she had cancer and was on her way out. Something told me I just had to go see her. I had to put my life and band on hold and say, ‘Screw it!’ and go hang out with her. I flew down to L.A. the next day and hung out with her. It was a weird experience being with this shell of a woman that I used to know. She couldn’t move or communicate. I didn’t know what to do. I hung out with her for a few hours and she died the next morning. If I hadn’t gone, I would have never experienced that. And that experience might have been what set me towards this idea of just existing and living in the moment, and that definitely plays into the record. “Happy Anniversary,” this sad new song, is based on that experience. It’s from the point of view of the someone who is dying. It’s one of the songs that I’m very excited about.

Motion City Soundtrack will launch a special seven-city tour in August, playing their entire four-album catalogue over two nights in each city. Get complete details at the band’s website.