Various Artists, ‘Music From Spider-Man: Turn Off the Dark’ 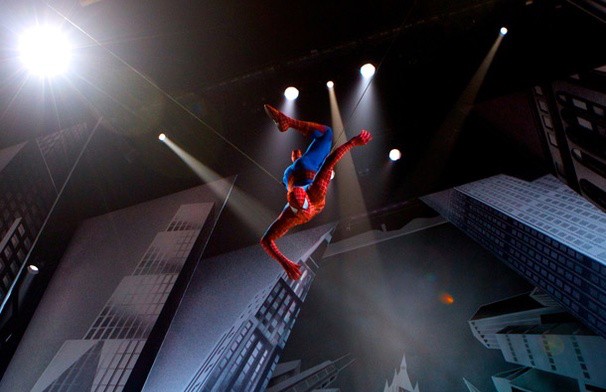 No stuntmen were harmed in the recording of this, the cast soundtrack to beleaguered megamusical and late-night talk-show punching bag Spider-Man: Turn Off the Dark, featuring arena-rock tunes supplied by U2’s Bono and the Edge.

The collision of Broadway cheesiness and Bono cheesiness is indeed fearsome to behold. “On this sunny day / Let your ‘magination run away!” announces the Nobel Prize winner, while the Edge chips in a bunch of C+ bombast-o-matic riffs and tries his hand at crawling, electro-goth menace, just in case someone turns The Crow into a musical, too.

But the swaggering Irishmen make only a couple of guest appearances; mostly this is a standard Broadway-cast-album affair. If you’re in it for the schadenfreude, proceed directly to “Pull the Trigger,” a dialogue-heavy, proto-nü-metal bacchanal of preposterousness that is, upon reflection, the best thing here, in that it’s certainly memorable; at least the scientist-harassment theme suggests an actual plot. (Otherwise, we’re left with Spider-Man, a.k.a. unremarkable, yet uncanny Bono clone Reeve Carney, vacillating between philosophizing and whining, in accordance with his uncanny Bono clonedom.) That song alone embraces the absurdity of the situation; the rest is far from essential for Broadway or U2 buffs, though it will be an object of lurid fascination for both.