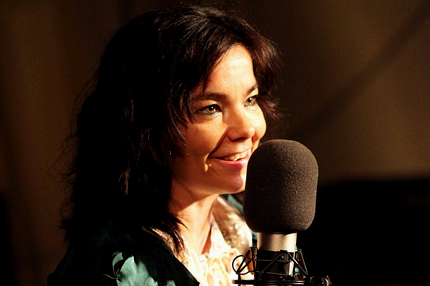 It’s been four years since Icelandic songstress Bjork released her last album, Volta. But this September she’ll return with Biophilia, a new studio LP and multimedia project — and now we have our first sample of its sound. Listen to “Crystalline” at Disco Naivete.

The track is a typical Bjork gem: an experimental mix of elements like xylophones and percussion paired with digital whiz-bangs, clattering drum machines, and, of course, Bjork’s passionate wail.

The track is the first single from Biophilia, a collaboration with Apple being billed as the world’s first “app album.” Directed by French auteur Michael Gondry, the multimedia project will feature music videos and 10 separate apps housed within one large app. Another song, “Virus,” is expected to feature a gaming element, where users will have to halt the attack of a virus. The music will later be released as a conventional album online and on CD.