How the Brooklyn band turned lineup drama into an album that cements their status as the most accessible band of indie's avant-garde. 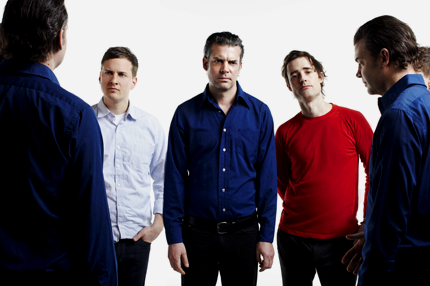 Frontman Tyondai Braxton abruptly left New York math-funk mutants Battles during the recording of their follow-up to 2007’s Mirrored. Yet despite the drama, the band went forward as a trio (Gary Numan and Boredoms’ Yamataka Eye contribute guest vocals) and turned out Gloss Drop, which cements their status as the most accessible band of indie’s avant-garde.

John Stanier (drums): It’s taken us two years to do this record, and the obstacles we overcame were ridiculous. From the very beginning when we were writing this record, we took way too much time off and other people’s extra things ended up going way longer than they were supposed to, and people weren’t inspired and fun things like that. And then of course we turned into a three-piece. We didn’t even have time to sit down and have this master plan of what we’re going to do. We just went back up to the studio, erased everything, started pretty much from scratch and banged it all out in four months. Even after that, we were beyond out of time. You finish, you mix it, and master it, and there’s no time to celebrate because you have to go play the Sonar Festival in Tokyo. But words can’t describe how happy I am now. We turned a negative situation into a positive one. It’s been a complete mind fuck, really stressful. But I think if we hadn’t come through with this, I probably would have regretted it for the rest of my life.

Ian Williams (guitar): Our music doesn’t make many compromises, but we take it into a venue that’s larger than people expect. That’s the thrill of Battles, the transgressive element.

Dave Konopka (bass): Our first show as a three-piece was in Osaka in April, so it was already a creepy situation with the nuclear threats. I think we were all really nervous, but I felt like we were about to get into the ring with Mike Tyson and get destroyed. But once we got onstage, it felt like this weight was off our shoulders. I don’t think any of us ever expected we’d reach so many people, but maybe the music world is more sophisticated now. We’re a brand new band now with the luxury of having worked together for eight years. So it’s on some brotherhood shit now.

Through Being Cool: Battles Just Don’t Give a S**t