U2 Kick Off Rescheduled American Tour 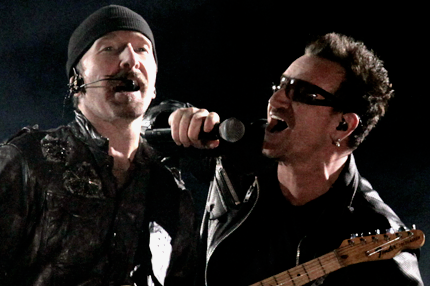 Saturday night U2’s 360 tour kicked off the rescheduled leg of its American tour in Denver, and became the biggest event the city has seen since the 2008 Democratic National Convention.

After a solid 60-minute set from hometown act the Fray, David Bowie’s “Space Oddity” came over the PA and the four members of the world’s biggest rock band entered 80,000-capacity Invesco Stadium through the same tunnel that the Denver Broncos use on game day. There were no pyrotechnics, aerial stunts, or other fanfare – they just walked in.

The opener, “Even Better Than The Real Thing,” set the mood for a powerful, meticulously paced set.

On “I Will Follow,” Bono gyrated and pranced about the stage like a teenager, not a 51-year-old man just a year past major back surgery that caused this tour to be reskedded. He thanked the German doctors who performed the surgery, joking, “If I were to pull down my pants, I have made in Germany stamped on my ass.I’m Bono 2.0!”

About seven songs into the set, the band nodded to the supposed “Rapture” that was predicted for Saturday with “Until The End of the World,” which Bono dedicated to doom prognosticator Harold Camping. While no rapture happened, the thousands of flashing lights and giant video screens made the crowd believe at moments that they were, indeed, witnessing something out of this world.

It had a been a rare rainy week in Denver, but Saturday’s perfect weather led to the first real climax of the show: the one-two punch of “Beautiful Day” and “Pride.” Both songs had people singing along and pumping their fists in the air, but the stadium really erupted when Bono broke into the chorus of The Beatles’ “Here Comes The Sun.”

Then the giant screen that hung above U2 began to expand and stretch toward the stage to create a sort of LED cage around the band. Bono led them through the title track of their 1993 album Zooropa before each member donned LED enhanced jackets for “City of Blinding Lights.”

It was a majestic performance in every way, and as U2 left the stage before the first encore, Bono introduced a video from the recently freed leader of Burma, Aung San Suu Kyi.The heartfelt message thanked U2 fans and Amnesty International for playing a role in securing her release from house arrest after more than 20 years.

For the first encore, they broke into one of the biggest songs of their career “One.”Bono then picked up a guitar and sang a few lines of “Will You Still Love Me Tomorrow” before The Edge took over and filled the air with the epic introductory riff to “Where The Streets Have No Name.”

After another short break, Bono sang the only non-album track of the show, “Hold Me, Thrill Me, Kiss Me, Kill Me.”

The only low point of this unforgettable set came as the band ended on “Moment of Surrender” from their 2009 album No Line On The Horizon.Though critically acclaimed, the song didn’t pack the punch that the night had been building toward, and many in attendance were left scratching their heads as U2 made their way off the stage to the strains of Elton John’s “Rocket Man.”

That minor quibble aside, U2 showed Denver why they are still the biggest band in the world – and deserve to be.

Tim Dwenger
Tags: u2, We Were There