Hear the iconic SoCal punk group's lead track from their first album since 2002. 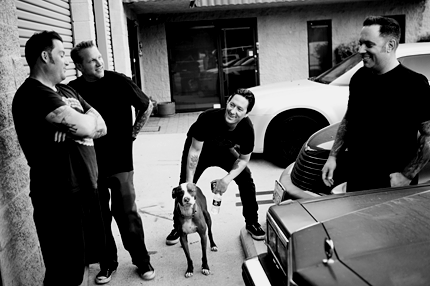 After forming in 1991, Face to Face established themselves as one of the most kick-ass bands of the SoCal punk scene, alongside peers like Blink-182, Guttermouth, Pennywise, and others. The group’s glory was short lived: creative differences forced them to break up in 2003, and despite touring behind their classic material since reuniting in 2008, they haven’t recorded any new music.

That will all change this month as the group celebrates their 20th anniversary: Face to Face will release their first new album, titled Laugh Now, Laugh Later, in almost a decade on May 17. But SPIN has an exclusive download of one of album’s tracks, titled “All for Nothing.”

Frontman Trever Keith tells SPIN that the group’s motivation for recording new music was simple: “The impetus was really just the fact that we had been touring since 2008 on our classic material and we felt like now the band is back and in full-forward motion. We needed to make a new record.” But it’s not like they cranked it out in one-week. Keith adds that he and bassist Scott Shiflett have been writing material since last year.

You can tell they put hard work into their new songs: “All For Nothing,” which vibes a back-to-basics feel of early ’90s Cali punk, is packed with hooky guitar riffs and angsty vocals, as Keith busts a lung during the song’s kinetic, soaring verses. “It’s a song about addiction,” he adds. “Some addictions are stronger and more destructive than others, but we all have them.”