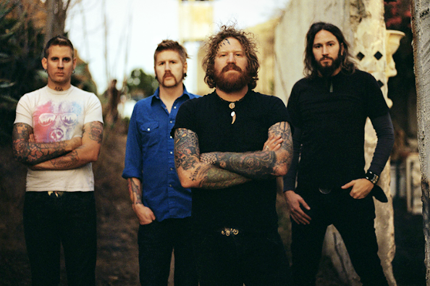 It’s been two years since Mastodon released their explosive epic Crack the Skye, but now the Atlanta heavy metal kings are back in the studio working on their fifth album, and drummer Brann Dailor says the early tracks have a Led Zeppelin vibe and harken back to the relatively striped back 2004 LP Leviathan. The band has also posted photos in the studio on their site — that Dave Grohl pictured with a guitar in the first slide? — which you can check out here.

“It doesn’t seem as proggy,” Dailor tells Noise Creep about the new material. “There’s moments, but it seems more riff-oriented. It seems a little stripped down… At the moment, it seems like a really super-heavy Led Zeppelin or something. It has a lot of that [John] Bonham-esque groove to it, but really heavy and dark.”

The record is still in the early stages, but Dailor says it will be a conceptual, like Leviathan and Crack the Skye. “It’s not totally ready, but it’s gonna be cool,” he says. “It’s a mythology that’s invented because we care so deeply as human beings for one another, it’s hard to think that you just got into a hole [after you die] and that’s it. So you want to see your loved ones be exalted in some way, or be a part of something that’s much more grandiose.”

Singer-guitarist Brent Hinds, meanwhile, has two side-projects in the works: new bands Fiend Without a Face and West End Motel, according to Pitchfork. Hinds will release music from both bands as a double-CD set on June 7.

Fiend Without a Face is described as a “rockabilly/porno/metal concoction mixed with a bit of country, surf guitar, and applesauce on the side,” while West End Motel is billed as a “ballad-happy bar band.” Head here to stream Fiend’s “Tsunami,” and here to preview West End Motel’s “I Like It Alot,” which sounds like deranged Tom Waits.