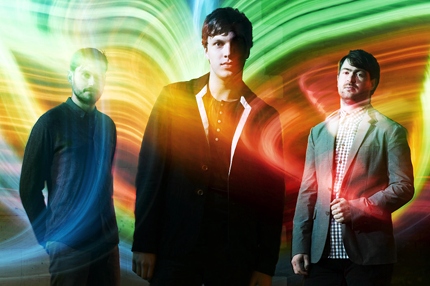 LCD Soundsystem may have called it quits, but Britain’s Friendly Fires are poised to take their place as this year’s hottest dance-rock act with their excellent new album Pala, an insanely catchy synthesis of jittery, Afrofunk rhythms and singer Ed MacFarlane’s emo-ish confessionals. The record’s not out until May 24, but the band has just released the album’s best track, “Hawaiian Air,” which you can hear here.

On the song, MacFarlane shows off his powerful pipes in a vivid lyrical travelogue about jetsetting to the tropics for vacation. (Leave it to a Brit to find a downside to a Hawaiian holiday: dude details getting motion sickness on a helicopter ride after slugging three gin-and-tonics.)

But the music perfectly matches the paranoid vibe of MacFarlane’s tale — there’s skittery synths, reedy Mellotrons, what-was-that atmospherics — and it’s all unified by the insanely tricky tribal groove, which recalls the A-side of Talking Heads’ 1980 classic Remain in Light.

Friendly Fires will bring their live show to the States this month: the group kicks off a tour on May 25 in New York City; it wraps June 10 in Los Angeles. See the full tour schedule.