U2: Live in São Paulo, Brazil

The world's most profitable rock band brings their 360 Tour to 90,000 Brazilians. 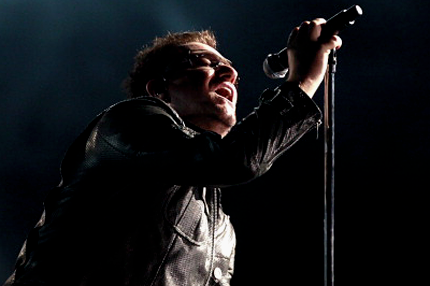 On Saturday night as U2’s 360 Tour became the highest-grossing show of all time ($558 million and counting, surpassing the Rolling Stones’ A Bigger Bang tour in 2005-2007), money was not on anyone’s mind as the sonic exoskeleton spider crawled into São Paulo’s Morumbi Stadium with a heavy heart. Brazilian President Dilma Rousseff announced three days of national mourning after a school shooting in Rio de Janeiro two days prior left 12 students dead. Fortunately, random massacres such as this are even more rare then a U2 concert in Brazil; and if there is anything besides a World Cup championship to brighten the mood — at least for the 90,000 in attendance — it’s two hours of textural, sociopolitical-fueled rock and roll pomp and circumstance.

Still, the tragedy was not to go unmentioned. Before launching into standard 360 closer “Moment of Surrender,” Bono struggled through the Portuguese pronunciation of the school (“Tasso da Silveira”) before being relieved by the hexagonal, 500,000 pixel video screen, which ran a solemn list of the names of the victims. It was a somber end to what was already a low-key encore (“Hold Me, Thrill Me, Kiss Me, Kill Me,” “With Or Without You,” and “Moment of Surrender”), leaving some to wonder if a high note, such as “Pride (In the name of the Love)” — skipped altogether — might have served as a more uplifting finale to the first of a three-night stand here for the band.

Things kicked off far more buoyant, however. Before David Bowie’s “Space Oddity” graced the soundsystem as the standard clue that takeoff is imminent, Adoniran’s “Trem de Onze,” considered one of the top five classic sambas of all time, threw the crowd into singing-in-unison frenzy only matched throughout the entire show during “I Still Haven’t Found What I’m Looking For,” one of three tracks from The Joshua Tree that made the cut on this night.

Things began proper with a resounding “Even Better than the Real Thing,” an Achtung Baby gem which has been resurrected from the archives for the first time in a decade for 360’s South American leg. The mood was also brightened by the cooperation of the skies. Muse’s opening set was marred by rain — as common in São Paulo as sunrises — as was the exodus afterwards, but U2’s set itself remained dry, a blessing of incalculable proportions for the third biggest city on the planet.

Muse’s set was also struck with sound issues, something quickly resolved during U2 with the exception of a brief microphone cut during “Stuck In A Moment You Can’t Get Out Of.” Otherwise, 360 delivered the sonic goods, with The Edge’s guitar tuned as crisply as thin shards of glass, most notably on “I Will Follow,” “Beautiful Day,” and “Where the Streets Have No Name.” Contrary to rumor (or perhaps wishful thinking), no new songs from U2’s rumored three new albums in 2011 were debuted, though newer tracks dominated throughout the night (only six pre-Achtung Baby songs found their way into the set).

Bono chose to highlight Pizza Paulistana as he introduced the band, comparing each member to a different type of pizza (with the highest Italian population in the world outside Italy, it’s a little known fact that that the some of best pizza in the world can be found in São Paulo). It was fitting comparison in a country that coined the phrase “Tudo acaba em pizza.” Literally, it means, “Everything ends in pizza,” but the metaphorical significance is far greater: An amazing pizza can rectify all things — good, bad and even tragic. On this despondent evening, a pizza alone wasn’t quite going to cut it, but served along with a sonic side dish of Bono and Co., it would, at least for a moment, allow for a small proportion of a population in mourning to trade tragedy for an unforgettable fire.

Set List:
Even Better Than The Real Thing
I Will Follow
Get On Your Boots
Magnificent
Mysterious Ways
Elevation
Until The End Of The World
I Still Haven’t Found What I’m Looking For
Happy Birthday
Stuck In A Moment You Can’t Get Out Of
Beautiful Day
In A Little While
Miss Sarajevo
City Of Blinding Lights
Vertigo
I’ll Go Crazy If I Don’t Go Crazy Tonight
Two Tribes (snippet)
Sunday Bloody Sunday
Scarlet
Walk On
One
Help (snippet)
Where The Streets Have No Name
Hold Me, Thrill Me, Kiss Me, Kill Me
With Or Without You
Moment of Surrender

Kevin Raub
Tags: u2, We Were There