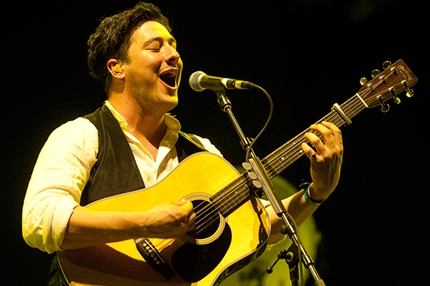 BEST BREAKTHROUGH: MUMFORD & SONS
“This is by far the biggest gig we’ve ever had,” said Mumford & Sons frontman Marcus Mumford from the main stage on Saturday night. They’ve certainly earned it, with their debutalbum Sigh No Moreselling more than a million copies and the band’s live show moving audiences all over the world. Even though the band’s Coachella gig could be taken as a confirmation of their ascension to superstar status, the London quartet were as humble and earnest as ever — they frequently reminded the crowd how much they appreciated their support and refrained from any rock star hot-dogging. Musically, they stuck to their British take on American roots music: they stormed with passion and precision through up-tempo acoustic guitar and banjo bashers like “Little Lion Man” (which earned the loudest crowd sing-along) and the new song “Lover of Light,” and keened beautifully on ballads “Roll Away Your Stone” and “Thistle & Weeds.” Through it all, the band members — especially Marcus — looked both deathly afraid of messing up and agog with wide-eyed wonderment. It was charming, an adjective you don’t often get to use with the world’s biggest bands. Yep, that now includes these guys. –DAVID MARCHESE

BEST FUNK-SOUL ORCHESTRA: ERYKAH BADU
When you roll with a 14-piece band, technical difficulties are to be expected. Perhaps that’s why Erykah Badu responded with humor when her mic squealed back at her early in the set: “Keep in mind I’m an artist,” she grinned. “I’m sensitive about my shit.” But she wasn’t precious about the arrangements of her songs, which became sprawling slabs of thick, gloriously soulful noise peppered with celestial jazz, glitchy electronics and far-out space-rock. Her lineup included two guitarists, four backup singers, bass, drums, congas, turntables, trumpet, and flute, and the high point was an extended version of “On and On,” which segued into the old favorite “Apple Tree” before turning into an improvised old-school electro jam. –CHRIS MARTINS.

BEST INTERGALACTIC SPACE TRIP: EMPIRE OF THE SUN
The easiest way to blast off wasn’t with MDMA, LSD, peyote, or any other mind-expanding drug. It was with sci-fi Australian dance outfit Empire of the Sun, whose set at the Outdoor Theatre was out of this world. Leader Luke Steele stood on a glowing podium, dressed like the ruler of a far off galaxy in a gold headdress and chest and shoulder plates. He led his band in the electro-dance-meets-sci-fi-dream-pop of tracks like “Walking on a Dream” and their best song “We Are the People,” a heady mixture of strummy folk, arty prog, and icy funk. Yep, a sound that’s totally alien and totally fun, especially when paired with the immersive onscreen images of far off planets and galaxies, and onstage dancers dressed in oddball Stormtrooper-esque outfits. –WILLIAM GOODMAN

BEST HISTORY LESSON IN BRITISH ROCK: ELBOW
If you’d wanted to give someone a crash course in English rock, you could’ve done worse than taking them to Elbow’s performance in the Mojave tent. As the sun began to set, the veteranManchesterband showed why they’re masters of channeling their compatriot forebears. Scruffy frontman Guy Garvey, dressed in a white button-down shirt and black blazer, has a warmly resonant voice of Peter Gabriel, whose work with Genesis informs the pastoral melodies and arty drama of Elbow songs like the epic, melancholy “Grounds for Divorce.” Even in the space of one tune like “Neat Little Rows,” the band touched on everything from Radiohead’s guitar sweep, the booming synth-dappled drama of ’70s-era Who, and the crunching slide guitar and atom bomb kick drum attack of Led Zeppelin. Elbow’s lack of true innovation may be why they haven’t made any inroads Stateside, but on this night they did their homeland proud.–D.M.

BEST FRONTMAN: THELONDONSUEDE
In the early ’90s, Suede (called “The London Suede” in theU.S.,thanks to another act who trademarked the name) helped kick off the Britpop explosion with their glamorous mashup of glam-rock stomp, Smiths-y guitar hooks, and singer Brett Anderson’s lyrics about damaged dreams and dangerous sex. Founding member Bernard Butler’s 1994 departure killed their career momentum, and they eventually settled into cult status, but you wouldn’t have known that fromAnderson’s performance — the group’s firstU.S.show in 14 years. Dude strutted and swaggered like he was fronting the biggest band in the world. Singing in his seductively androgynous bray,Andersonlent an air of demimonde malevolence to the pummeling “Animal Nitrate” and “The Drowners,” often falling to his knees to hit the high notes, then popping back up to lean over the crowd, teasing them by holding himself just out of reach. Slim and dressed all in black, he playfully whipped his hair and leapt onto the monitors at the climax of swirling noirish ballads like “Pantomime Horses.” (He also engaged in some mighty fine microphone spinning.) He’s perhaps the only man who can sing a line “Let’s chase the dragon” and seem rad rather than ridiculous.–D.M.

BEST SECOND ACT: BIG AUDIO DYNAMITE
The Clash were one of the greatest and most important bands of all time, so when guitarist and singer Mick Jones left to form Big Audio Dynamite in 1984, he was always going to have a hard time measuring up. But time has a way of smoothing over rough transitions. The English band’s gig — only their secondU.S.show in more than 20 years — made the case that B.A.D. have a legacy worth remembering. Set highlights “E=MC2″ and “The Battle of All Saints Road” were rambunctious, freewheeling blends of punkish guitar snap, pop melodies, co-frontman Don Letts’ reggae toasting, and hip-hop boom bap, presaging the similar genre experiments of the Gorillaz and the Madchester scene. Jones also wins points for some charmingly loopy banter: “I love jackrabbits,” he told the crowd at one point. “We don’t have ‘em at home.”–D.M.

WORST BAND TO PIGEONHOLE: THE FELICE BROTHERS
Okay, they use accordion and fiddle, so upstateNew York’s the Felice Brothers are a folk band, right? Well, they also play long woozy songs that sound like demented cabaret tunes. Then there are the ones that wildly careen in the best punk fashion. But how about when the accordion dude sets his instrument down and sings a heartbreaking a capella sea chanty? Or when the guitarist leads the band in his Dylanesque sneer through a crashing rock’n’roll number with a cigarette in his mouth and fire in his eyes? Maybe some of the other people in the sparsely attendedGobitent — the band was scheduled opposite Animal Collective — had a better sense of how to characterize the rollicking quartet, but for now let’s just call them great.–D.M.

BEST GUITAR STORM: BROKEN SOCIAL SCENE
Coachella has had no shortage of DJs, electronic acts, or oddball dance mavens like Empire of the Sun, but it was Broken Social Scene who delivered epic, no holds bard guitar shredding. The Toronto collective brought that and more during their late afternoon set on the main Coachella Stage. On “Texico Bitches,” from their latest album Forgiveness Rock Record, four electric guitars collided in a gorgeous tangle of melody, and on “Cause = Time” and “7/4 (Shoreline),” which featured the vocals of wild-haired Lisa Lobsinger, the band reacted and played off each other’s every move. “This is the one that’s supposed to make you feel alive,” leader Kevin Drew said before their final song, “Meet Me in the Basement.” It did. –W.G.

BEST WAY TO DANCE OFF THAT FRESHMAN 15: TWO DOOR CINEMA CLUB
It’s college rock Version 2.0. This Northern Ireland-based trio have become very popular with the dorm-room set. Case in point: Their packed set at the Mojave Tent, where the band drew the same collegiate crowd that voted for them to win an mtvU Woodie award in March. Over the angular guitars and dance beats of anthemic rockers like “I Can Talk,” from their 2010 album Tourist History, the throng welcomed the band with intense dancing, moshing, and beach balls. “It’s rare to come to a festival for the first time and get such a response,” said singer Alex Trimble. True that. –W.G.

WORST HEAT RESISTANCE: THE RADIO DEPT.
Swedish trio the Radio Dept craft lush dream pop, but underneath the oppressive midday heat in the Gobi Tent, their subtle, nuanced sound melted like ice in a 100-degree broil. But that’s not to say their set was off. Though sweating profusely, mastermind and singer-guitarist Johan Duncanson and Co. — a keyboardist-effects guy and a bassist-guitarist — played an ambient set of tracks from their decade-deep catalogue, plus gems off their new album, Clinging to a Scheme, including “David” and “Heaven’s On Fire.” But the delicate washes of guitar and watery riffs evaporated. See ‘em in a dark club in January for full effect. –W.G.

BEST WAY TO WEATHER THE HEAT: FOALS
It was hot as hell when self-described “tropical prog” act Foals took the stage, but the sweat-drenched British group had the right remedy: a largely instrumental set that focused on steady guitar groove instead of the sharp, post-punk left turns they’re known for. The ambitious crowd members danced to the breezier Afro-inspired numbers, while others preferred to simply soak in the cooler, more subdued songs. In other words, there was something for everyone. Fittingly, they closed with “Spanish Sahara,” a slowly growing wave of big, easy rock that glistened like an aural mirage. –C.M.

WORST MISSED OPPORTUNITY: WIRE
Along with Mick Jones’ freshly reunited Big Audio Dynamite, Wire were one of this year’s resident elder statesmen, but their set was hit by surprisingly low attendance. It certainly didn’t help that they were up against B.A.D., and bassist Graham Lewis seemed a bit snippy when he pointed out that his band had “been around the world” a couple of times. Still, Wire were in top form, splitting their set between tightly executed rapid-fire barnburners like “Comet” — in which they transformed into a careening punk locomotive — and slower sonic experiments like “Please Take.” On both counts, plenty of other Coachella acts could’ve picked up a few tricks (Colin Newman’s guitar work was sublime), but, alas, the lesson went largely unheard. –C.M.

BEST ENTRANCE: RAPHAEL SAADIQ
When Raphael Saadiq’s sharp-dressed nine-piece took the stage, the singer was nowhere to be seen. Instead, the band let loose a clarion call of blazing hot rock’n’roll while a six-foot-tall suited hype man ran back and forth, clapping and punching the air in time with the drums. It felt like the opening bluster of a late night talk show, and even more so once Saadiq finally emerged. With tambourine in hand, he did a lap around the stage, grabbed his mic and launched into “Staying in Love.” He sustained his energy throughout, and at moments evoked the sort of unhinged verve that would’ve made James Brown proud. –C.M.

BEST BOASTS: LIL B
At times, it was tough to tell the difference between Lil B’s loose, repetitive freestyle rhyming and his off-the-cuff banter, but there was definite consistency between the two. A Lil B pie chart might look something like this: 15 percent big-upping his physical appearance (i.e., looking like both Jesus and “a pretty bitch”), 25 percent boasting about his contributions to society (“If ya’ll don’t know who I am, I make history every day revolutionizing the computer.”), and 60 percent devoted to soliciting fellatio from the ladies. “I’ve got the best performance in here,” he bragged at one point. “It’s like a Saturday Night Live skit,” whispered someone in the crowd. They were both right. –C.M.

BEST LOVE FEST: JENNY AND JOHNNY
Do any musicians smile as much as these two lovebirds? Unlikely. During their set at the Mojave Tent, the Los Angeles couple flashed smirks back and forth while testifying their love on a number of cutesy duets written for — who else? — each other. On “Committed,” they traded verses about the emotional responsibilities of relationships (“You have to be patient,” they sung), while on the sunny indie-pop number “Scissor Runner,” Johnathan Rice addressed his main-squeeze, crooning, “She’s an artist painting a portrait all over my heart.” Awww. –W.G.