Brendon Urie and Spencer Smith reveal some of the tricks behind their just-released third album. 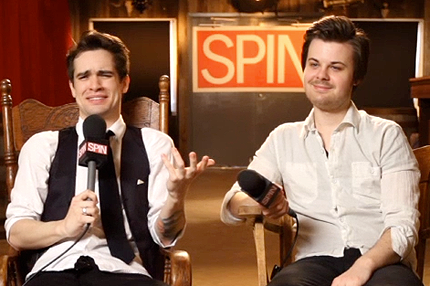 Panic! at the Disco are back with their third album, Vices & Virtues, and it’s got a bunch of neat aspects of which frontman Brendon Urie and drummer Spencer Smith are really proud.

“There’s a lot of cool little things we got to put on the record,” Urie told SPIN, hanging out in the SPIN Shed in Austin, Texas. “We got a children’s choir. We got a band called the Plastiscines to sing French on the record, which sounds kind of pretentious but still sounds cool.”

There was also some high-tech mobile recording involved, too. “We went as far as to use an iPad to record a synth on the record,” Urie said. “Pretty.Modern,” he joked, riffing off their second album’s title, Pretty.Odd.

Watch the interview below, and check out performance footage of the band from SXSW!

Peter Gaston
Tags: Music News, panic at the disco, The SPIN Shed in Austin 2011, the wire