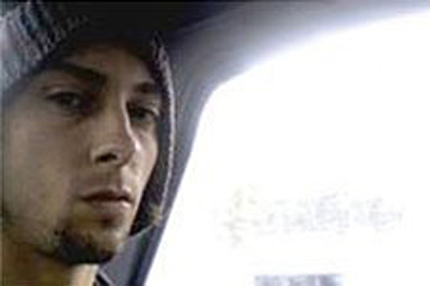 Burial’s William Bevan may be one of the more recent innovators of Britain’s dubstep genre – he’s certainly helped win fans over here in the States and evolve the genre beyond the club – so whenever new songs hit the web, it’s the equivalent of a Lady Gaga leak for electronic music freaks. To wit: two new cuts from the reclusive British artist premiered last night on BBC 1 Radio, and they’ll be featured on a three-track vinyl single to be released next week (via Pitchfork).

“Stolen Dog” and “Street Halo” pick up largely where Bevan left off with 2007’s Untrue – and that’s definitely not a bad thing. The tracks are haunting, somnambulistic slow-burners aimed squarely at the Robo-Tripping set, with flickering synths, stutter-step electro beats, and detached, vox-tweaked snatches of female vocals. The radio DJ’s promo overdubs are annoying, but the overall vibe exudes aloof South London cool – the type of music you’d want to hear on a rainy night home from the pubs.