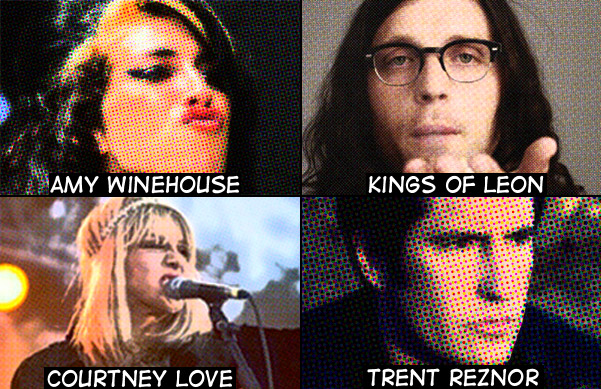 When Kings of Leon's Nathan Followill responded to Glee creator Ryan Murphy's attack on KOL for their refusal to license their songs for the popular FOX show, he was the latest in a long line of artists who've used Twitter as a way to air their uncensored opinions 140 characters at a time.

Here, SPIN looks back at the funniest and most outrageous text wars that have erupted on the popular social media service.

When Kings of Leon's Nathan Followill responded to Glee creator Ryan Murphy's attack on KOL for their refusal to license their songs for the popular FOX show, he was the latest in a long line of artists who've used Twitter as a way to air their uncensored opinions 140 characters at a time.

Here, SPIN looks back at the funniest and most outrageous text wars that have erupted on the popular social media service. 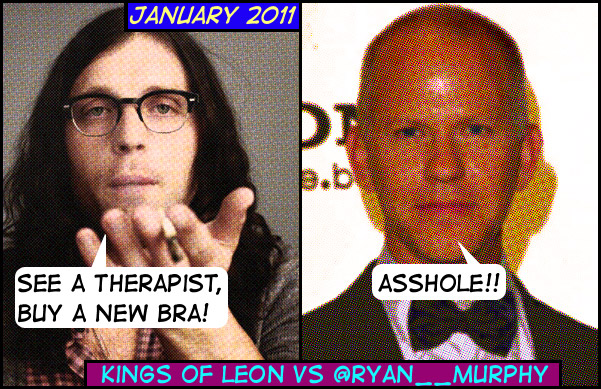 After Kings of Leon rejected an offer to have their music featured on FOX's hit show Glee, creator Ryan Murphy responded by calling the group "self-centered assholes." Drummer Nathan Followill swiftly chimed in via Twitter with a brash statement many viewed as homophobic: "Dear Ryan Murphy, let it go. See a therapist, get a manicure, buy a new bra. Zip your lip and focus on educating 7yr olds how to say fuck." 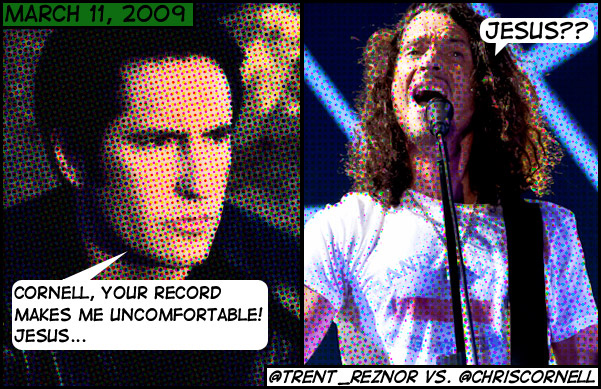 Nine Inch Nails' Trent Reznor lambasted Chris Cornell's solo record back in March 2009, posting, "You know that feeling you get when somebody embarrasses [sic] themselves so badly YOU feel uncomfortable? Heard Chris Cornell's record? Jesus."

Two days later, Cornell fired back with a Tweet that was a straight-up Jesus Christ Pose. "What do you think Jesus would twitter? 'Let he who is without sin cast the first stone' or 'Has anyone seen Judas? He was here a minute ago.'" 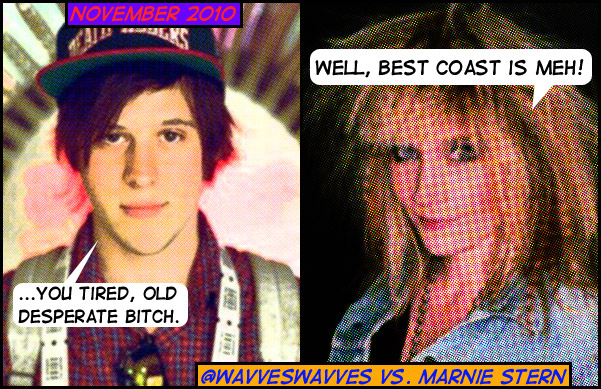 Guitar-shredding virtuoso Marnie Stern blasted Best Coast's Bethany Cosentino in a September interview by saying the lyrical content of her boy- and cat-centric songs was "unacceptable." "You might as well then be an '80s hair metal band saying, 'I want pussy,'" Stern said.

Cosentino's boyfriend Nathan Williams (of Wavves) issued a harsh attack on — what else? — Stern's age. "If I was a tired old desperate bitch I might say something like that too," he Tweeted. 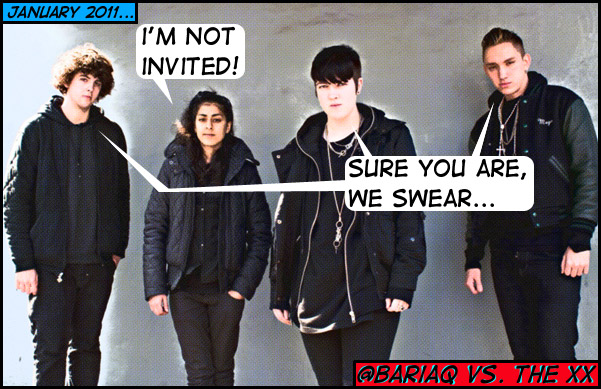 Last July, the xx said they'd be glad to have one-time member Baria Quereshi join them for the U.K.'s Mercury Prize ceremony, despite Quereshi quitting the band over what singer Romy Madley Croft called "personal differences." Apparently, Quereshi didn't get the invite: six months later, she posted that the xx's Oliver Sims "was all talk no action." "I bet I don't get invited to the Brit awards this year just like i didn’t for the Mercury prize….despite my work being nominated," she Tweeted. 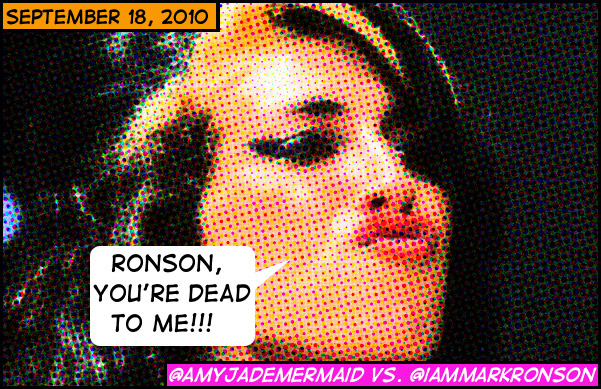 In a September 2010 appearance on The Jools Holland Show, producer Mark Ronson spoke about his role in producing Amy Winehouse: "She would come to me with just a song on an acoustic guitar and then you'd kind of dream up the rhythm arrangements."

Winehouse read too deeply into his seemingly innocent comments and posted on Twitter, "ronson you're dead to me; one album i write an you take half the credit — make a career out of it? don't think so BRUV." 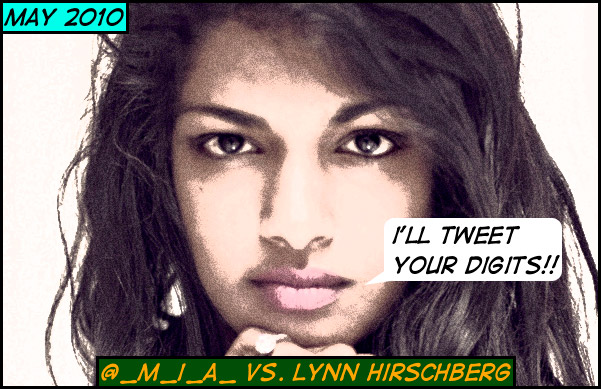 In the New York Times Magazine last year, writer Lynn Hirschberg's unflattering profile of M.I.A. accused the rapper of being a dishonest revolutionary, addressing, among other things, her moving to an upscale Los Angeles neighborhood and marrying the very wealthy Benjamin Bronfman, son of Warner Music mogul Edward Bronfman, Jr. "What Maya wants is nearly impossible to achieve: she wants to balance outrageous political statements with a luxe lifestyle; to be supersuccessful yet remain controversial," wrote Hirschberg, who added in colorful details like M.I.A.'s apparent taste for expensive, truffle-flavored French fries.

M.I.A. went apeshit after reading the piece and broadcasted Hirschberg's cell phone number to her more than 100,000 Twitter followers. "CALL ME IF U WANNA TALK TO ME ABOUT THE N Y T TRUTH ISSUE," she wrote. Later, M.I.A. posted her own audio of the interview, including an unedited audio excerpt that seemed to suggest Hirschberg was the one who goaded M.I.A. into trying the truffle-flavored fries.

9. Courtney Love vs. the Internet 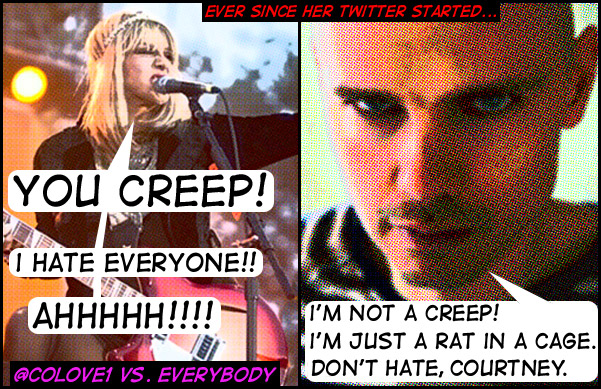 She's the Nelson Muntz of Twitter, and every celebrity is fresh kill for Courtney Love, from easygoing fashion designers to pop star Lily Allen. But when ex-flame Billy Corgan criticized her parenting skills and songwriting abilities last year, Love fired back with her boldest attack yet: "[Billy] coughs up this spiritual shit like bile and lives none of it. I really think its truly creepy how jealous and obsessed w [Frances Bean Cobain, Love's daughter] he is."

The bullying may end soon, however: Love is currently embroiled in a defamation suit after posting insulting comments about designer Dawn Simorangkir on Twitter. 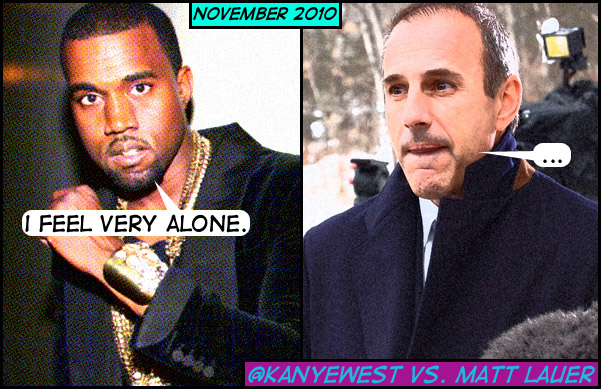 During an interview with Today's Matt Lauer, Kanye West became visibly annoyed when the network rebroadcast footage of his infamous Taylor Swift incident, which West believed was the network's sly way of prompting a heated reaction out of him on live television. After his interview, West aired his dissatisfaction with NBC on Twitter: "I feel very alone very used very tortured very forced very misunderstood very hollow very very misused." 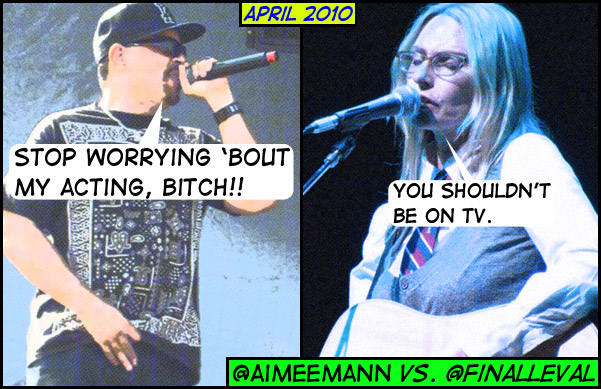 Twitter has sparked all sorts of unlikely wars between musicians — even alt-rock icon Aimee Mann and rapper Ice-T. On her Twitter last April, Mann criticized the rapper's acting skills on Law & Order: "Christ, there is no reason in the world anyone should ever have cast Ice T in a television show."

T was far less diplomatic in his response to Mann when he unleashed one of the most hilarious Twitter disses ever: "Hey @aimeemann stop worrying bout my acting bitch, and worry about your WACK ass music. In the mean time.. Eat a hot bowl of Dicks! Ice T" 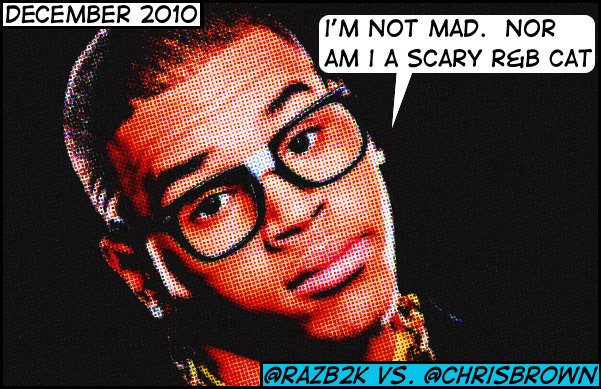 After professing his admiration for Rihanna last December, B2K's Raz B followed-up with a post that asked how "niggas" like Chris Brown could physically assault women. Brown — who had previously boasted of his completion of domestic violence counseling — quickly went into rage. "Grow up nigga!!!" he posted. "Dick in the booty ass little boy." His posts only got more apoplectic: "Why when the money was coming in you weren't complaining about getting butt-lugged #homothug!!!"

13. Damian Abraham vs. Anyone Who Will Respond 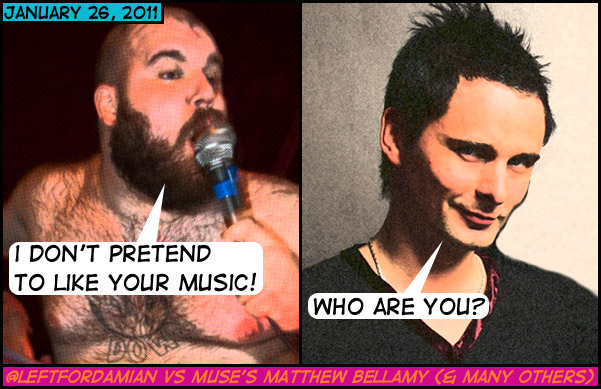 Question: If a musician posts a tweet, and no one re-tweets it, does it still make a sound? In the case of Fucked Up's Damian Abraham, the answer is a resounding no.

Over the last few months, the frontman of the Toronto punk group has lobbed insults at everyone from Amanda Palmer to director Kevin Smith on his endlessly amusing Twitter, although they've failed to generate responses from those he's dissed. His harshest Tweet was directed at Kate Hudson for being romantically involved with Muse's Matt Bellamy: "This makes me feel sorry 4 Kate: condemned 2 a life of pretending Muse are good."