The Scottish rock band & the L.A. writer will team up for a benefit event this week in Los Angeles. 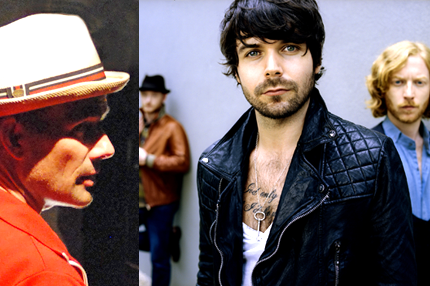 Scottish rockers Biffy Clyro and L.A.-based author Mark Danielewski will take the stage together Wednesday night, March 2, at Los Angeles’ Bootleg Theater for SPIN’s Liner Notes, a series that explores the common ground between music and literature — and benefits a good cause. All proceeds will go to Homeboy Industries, a Los Angeles-based non-profit that helps at-risk and former gang-involved youth become contributing members of the community. Get tickets here.

We caught up with Biffy frontman Simon Neil and Danielewski to discuss how their connection originated, and how Danielewski’s novel, Only Revolutions, inspired Biffy’s album of the same name.

Simon Neil: I first became aware of Mark in about 2002 when somebody passed me a copy of House of Leaves. I had never really read a book quite like it. It really kind of grabbed my life in a way that other books hadn’t and it kind of dominated my life — I kept re-reading it, you know, which is unusual for me with books. After we completed all our songs for our first record, I was in Mexico with my wife and I read Only Revolutions for the second time. It’s a love story told from two people’s point of view, and I felt like the songs we were writing were about myself and my wife, and how when you’re in love with someone you can still hate them more than anyone else in the world, you can just have completely different points of view. I was reading that book and I just thought our album has to be called this. I guess Mark found out and a year or so later he came to our show in L.A.

Mark Danielewski:I began to hear about the band and the title of the album through fans. People started sending me some e-mails with links, asking, “Have you heard about these people? What’s the deal with them using the same title for the record?” And, at first I thought, well, maybe it’s a coincidence, but then it turned out it was a lot deeper than that. When I heard the song, I immediately recognized some of the thematic stuff that I’d been working on in Only Revolutions and so from then on I became more invested in listening to them. Then they played at the Troubadour [in L.A.] and it was that moment of, “Oh god, are they gonna be any good?” I remember I was with my sister [singer-songwriter Poe] and we both looked at each other and sighed cause it’s clear that they’re really good musicians. That was really thrilling and we got to say hello afterwards and it was a great deal of fun.

SN: He actually approached me; I hadn’t seen a picture of him in ages. He’s only got pictures in the back of the book and he was growing a huge, big beard, so I didn’t really recognize him.

MD: It was an alarming beard. It came out of a lot of stress and a little bit of sadness. A cat that I’d for fourteen years died. It was sort of a terrible death. It was cancer, and it had kind of a profound effect on me. At the same time, I was going to be finishing a draft of five books that were going to my publisher in September and I had vowed not to shave until I had finished the draft. This was a whole year later.

SN: He just came over and introduced himself. I was pretty much speechless for about the first three minutes. He was being really kind — he was really glad the band was good and not a shit band. There’s nothing worse than influencing something that you think is disgusting and horrible and worthless creatively. So he really put my nerves at ease. I was a bit too intimidated to ask him any questions about his work but he was a really, really great guy and he really responded to the music, and commented on a couple songs. And the fact that he just took time out of his day to come and do that was a real big thrill.

MD: I was probably equally nervous. I didn’t know if they were gonna be unpleasant, if they would be reflecting elements of the book that perhaps are there but are probably the rawer, more aggressive tones, which I think are important, but they don’t sum up what’s there.

SN: We don’t really discuss the lyrics even that much in our band. I think the boys discovered a lot of what was going with the lyrics by going back and checking out the book and understanding where that point of view came from. But they are absolutely in awe of Mark as well — House of Leaves is a really big book for us, and Only Revolutions is a challenge.

MD: On some level, Simon respects the book, but on another level — which he’s always incredibly courteous about not bringing up, though he certainly could — is that notion that [the album] Only Revolutions is his work, it’s very different from my work. In that sense, I have no province over what he’s doing, but I enjoy the dialogue that he created.

SN: For the Liner Notes event, we’re definitely trying to do something a bit unusual. We’ve never done anything at all like this, and I’m not sure Mark has, so we’ll maybe need some direction to see what the usual kind of setup is. The charity element is cool, too.

MD: One of the central components of Homeboy Industries is that they erase tattoos. They have a long list of people that are waiting to enter these rooms that have these fabulous looking lasers, which will de-ink them so they will no longer be defined by the gang markings that will define their relationship to the environment that they’re living in. I think the project is very exciting, a way to give people a new life, a new start. Also, it’s very specific. When you’re giving money to a charity just to help people, you can’t help but wonder, “Oh, is this just gonna go to a stapler? Is this gonna go to some tape? What are they really doing?” And here they’re saying, “You know what? You’re paying for the facility to actually remove these tattoos, which can get a person killed.”