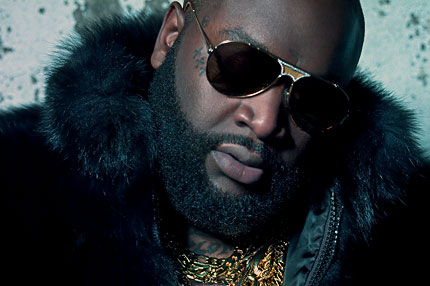 Rick Ross released his fourth (and best) album Teflon Don only six months ago, but now the Miami MC is already prepping the release of his next record, titled God Forgives, I Don’t.

In an interview yesterday with New York’s Power 105 FM, Ross said he’s about “60 percent” finished with the album, which doesn’t currently have a release date, but one track is already in the can: a collaboration with Drake titled “Made Men.” Hear it below. The track is a slow-burning banger, with Ross giving shout outs to Katy Perry and Madonna over ominous organs and a stutter-step beat. But it’s Drake who steals the show with his references to his rumored former flame Rihanna: “Off the rack just ain’t my style, I call a designer / One of my baddest women ever, I call her Rihanna / But that’s because her name is Rihanna.”

Another Ross track has leaked, too, titled “Pandemonium” and featuring his pals Wale and Meek Mill — although it’s not clear whether that cut will make God Forgives. Hear it here. The track is far heavier than “Made Men,” with the trio swapping aggressive rhymes about their sexual conquests — going so far to compare their power to the President. “I’m known as Obamas, though I know no one in Congress,” Mill raps. “Just give ‘em awesome intercourse and ignore all their inquires.”

What do you think of Ross’ two new tracks? Sound off below.