The alt-rock vets reveal they will not tour behind March album Collapse Into Now. 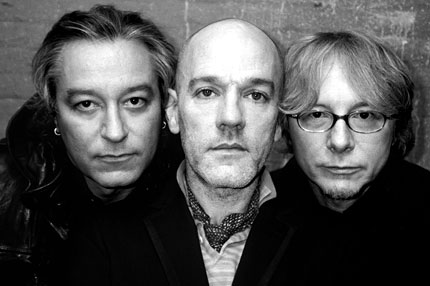 As they lead up to the March 8 release of Collapse Into Now, R.E.M. have released another new track, titled “Überlin,” which you can listen to over at The Huffington Post.

The song, accompanied by a cool graphic video inspired by the mass transit maps of Berlin, is one of the prettiest to leak yet: an uplifting, acoustic ballad featuring haunting atmospherics and Michael Stipe’s weary howl.

Producer Jacknife Lee explains that the song was kept in its raw state after the band presented it to him – but it did take some beating into shape. “The bridge had a vocal at one stage, but the music conveyed what he was saying anyway, so we deleted it,” Lee tells HuffPo. “I bought some little analog synths (Microtrons) for my kids and these were amusing us all. The middle section of the song needed to feel less grounded, so I had Peter [Buck], Michael, and Mike [Mills] do the middle section with the synths. It was really good fun.”

In related news, R.E.M. have announced they have no plans to tour behind the new album. The band’s manager, Bertis Downs, told Athens, Georgia Music & Arts (via Pitchfork) that R.E.M. “doesn’t tour to support every album, and this is one of those cases.”

What do you think of “Überlin”? Sound off in the comments.