Artist of the Year: The Black Keys

The hardest working blues brothers in show business finally get the recognition they deserve. 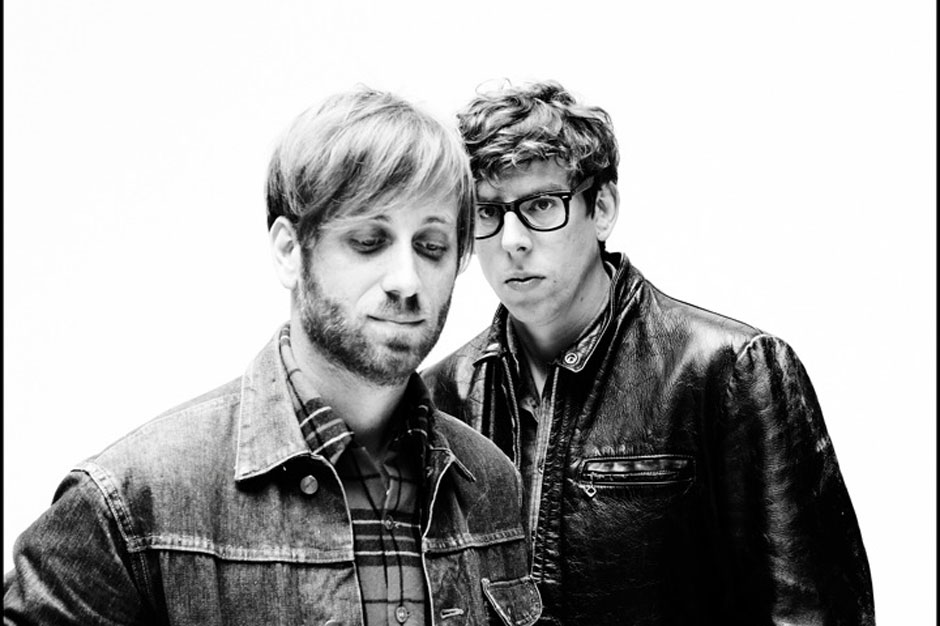 With their distinctive blooze racket and breakout year, you’d think it’d be hard to confuse Dan Auerbach and Patrick Carney with will.i.am and apl.de.ap. But you’d be wrong. [Magazine Excerpt]

Patrick Carney is certain it’s possible to get from ricotta cheese to the Black Keys in six clicks or less. “I have this new thing,” he says on a gloomy afternoon in Newcastle, England. “I’m working on a game show about navigating Wikipedia for the most obscure information. The fastest route to the information wins — it’s like six degrees of separation, but in Wikipedia pages. I’m on the ricotta cheese page right now. If I click on cheesecake, I’ll get to New York. That’s three.” A minute later, bingo: ricotta to cheesecake to New York to Lake Erie to Cuyahoga River to Akron, Ohio. “Keep this to yourself, because I think it could definitely work,” Carney jokes. “But if you know anyone who makes TV shows, tell them about it and I’ll cut you in.”

The Black Keys are closing out a year that saw their sixth album, Brothers — a dark, swampy, R&B-inspired stomper — become an indisputable hit, spurring a year of nonstop touring and enough film and television placements to make the Keys the most licensed band on Warner Music.

May 18: Brothers Born
The Black Keys recorded the bulk of Brothers at Muscle Shoals Sound Studios, a squat, concrete block building on Jackson Highway in northwest Alabama. It’s a mandatory stop for music geeks trawling the South for sacred sites (the Rolling Stones recorded “Wild Horses” there), but Carney and the Keys’ bearded singer-guitarist Dan Auerbach were antsy. “The first four or five days of making Brothers were really fun, and we were oblivious to the fact we were in a town with nothing to do,” Carney says. “The fifth day, it became obvious, and I was fucking over it. Then on the 10th or 11th day, Dan and I looked at each other like, ‘Let’s get the fuck out of here.’?”

Bored and having exhausted the offerings on Cracker Barrel’s laminated menu, they completed Brothers in just under two weeks. “We had no idea what to expect,” Auerbach admits. “All we knew was that we felt we had made the best record we could and were pretty excited about that. We’ve always felt like the underdogs — we were in the shadow of the White Stripes when the garage-rock thing happened, and then we never felt like we fit in anywhere.”

“When we finished the record, I thought it was our best,” Carney says. “But at the same time I assumed it would be the same kind of experience we’ve had the previous five times we’ve put out a record.”

It wasn’t: Brothers debuted at No. 3 on the Billboard chart after it was released on May 18, behind a Glee soundtrack and the reissue of Exile on Main St., brandishing the kind of commercial muscle — 73,000 units shifted — that, on another week, might have commanded the top spot. “We were all in New York that week, doing TV and some rehearsals,” Carney says. “We went to dinner at the Jane Hotel, and our label told us. I was fucking floored.” He pauses. “We’ve had a lot of moments this year that were, like, mindfuck-type shit.”

The Black Keys have never lacked for celebrity endorsements (Thom Yorke is a vocal fan), and it’s not unusual for Robert Plant to materialize at their gigs, including a private record-release show in New York. “He’s come to see us a bunch over the years,” Auerbach says. “I think Robert Plant and I probably listened to the same music growing up — blues music and American roots music. When we get together, we talk about that stuff.”

Auerbach’s blues pedigree certainly feels well earned: He watched Hill Country patriarch (and former Fat Possum labelmate) Junior Kimbrough wail at his legendary juke joint before it was torched in 2000, and, like any blues guitarist worth his cup of whiskey, he’s passed out on the floor of T-Model Ford’s trailer in Greenville, Mississippi. “My thing was, drive to Nashville, go to Robert’s [honky-tonk], have whatever Telecaster player was there blow my mind, go to Memphis and make sure I was there on a Sunday to go to Al Green’s church to watch him preach, and then go to Holly Springs [Mississippi] and go to Junior’s. I did that so many times and it was so fun.”

He hasn’t been back recently. “That stuff doesn’t really happen anymore,” he says. “I don’t know. I’ve been there, and it was magical when I was there, and I’ll keep it like that.”

August 6: Lollapalooza Woozy
“The thing that really made me realize things were different [in 2010] was at Lollapalooza,” Carney recalls. “There were, like, 50,000 people watching us, and I went into this weird panic mode that lasted through the middle of September. I melted down onstage. I didn’t fuck up or play poorly, but the whole time I felt like I was going to pass out. For six weeks after, I stopped picking up my phone and had this really weird stage fright every time we played.”

Finally, the morning of a gig at the Palladium in Los Angeles in September, Carney visited a hypnotist. “I got hypnotized, and then there was an after-party at the hotel where we were staying,” he says. “I went to sleep and woke up in the hallway of the hotel in my underwear at seven in the morning. I had sleepwalked and locked myself out of the room. I had no fucking idea where I was. I don’t even do drugs.”

The band spent most of 2010 on the road, which took its toll emotionally and physically. “The thing that’s different about this past year is we’ve toured way fucking more than ever before,” Carney says. “We’ve basically been on tour since June 1, with about three weeks off. We’ve done both tours — European and U.S. — twice. A huge band like U2 who does that, they’re playing three or four shows a week, flying in private jets, staying at five-star hotels. For us, it gets really fucking old. But if you want to make a living playing music, you have to tour. If it was up to me, I’d cancel the rest of the gigs here. Fuckin’ fried.”

Auerbach is more diplomatic, but no less exhausted: “Having to say goodbye to my daughter when I go on tour, that’s a continual low point.” [Excerpt]