Why They’re Called… Bring Me The Horizon 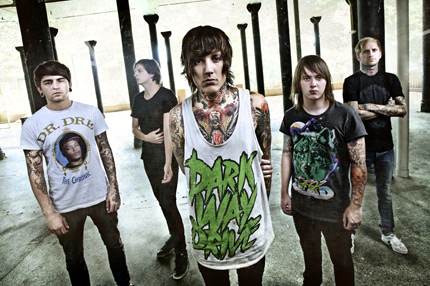 Welcome to the weekly SPIN.com feature “Name That Band”! inwhich we get the inside stories behind the mysterious monikers of some ofour favorite artists. (See past episodes of Name That Band! here.)

This week: British metal upstarts Bring Me The Horizon, whose There Is A Hell, Believe Me I’ve Seen It. There Is A Heaven, Let’s Keep It A Secret, released on venerable indie label Epitaph, debuted at No. 17 on Billboard’s Top 200 album chart in October.

Why Bring Me the Horizon: “It’s a slight change of a line from Pirates of the Caribbean,” explains lead singer Oliver Sykes. “Right at the end of the film — it might even be the very last line — Johnny Depp says, ‘Bring me that horizon.’ That was really inspiring. I was still living with my parents in Sheffield, England, when the movie came out [in 2003]. For me and the band, playing music was always wrapped up with the idea of touring and traveling and seeing the rest of England and the rest of the world. We never thought doing that was possible, but that’s what we wanted to do. So that quote sort of stands in for our feeling of wanting to see what the planet had to offer.”

Previously Rejected Names: “This Evidence in 8x10s, which could refer either to photographs or pieces of lumber. It may be the worst band name ever. It’s good we didn’t use it.”

Best Band Names Ever: “Poison the Well is a really cool name, and Death Cab for Cutie is a sweet one.”

Worst Band Name Ever: “In the metal genre, names with the word ‘killing’ in it are overdone. But a band name can be so bad and if the band is good enough, it doesn’t matter. There’s another Sheffield band, the Arctic Monkeys — their name sounded bad to me at first. Now I don’t think about how rubbish the name is because I quite like the band. I even like the name now, too.”