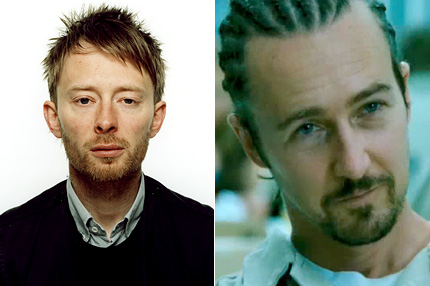 It pays to have talented friends and — who knew? — actor Edward Norton (the Tyler Durden) and Radiohead are buddies!

The Fight Club star recently reached out to his pals in the Oxford band for help with the soundtrack to his new film Stone, (out Oct. 8) co-starring Robert De Niro and Milla Jovovich, and directed by John Curran (The Painted Veil). Frontman Thom Yorke and guitarist Johnny Greenwood then donated never-before-heard demos to inspire the film’s composer, John O’Brien, to write its moving, atmospheric score.

Norton explained to Variety: “I’m friends with the guys in Radiohead, and Johnny Greenwood, who did the incredible score for Paul Anderson’s There Will Be Blood, met me in London a while back when John [Curran] and I were developing the script.”

Norton worked with Greenwood to capture the mood of the film, a tale of religious philosophy and guilt centered around a convict (Norton), his wife (Jovovich), and his parole officer (De Niro).

Added Norton: “So given the spiritual ties in this film, I started talking to him [Greenwood] about this idea: ‘What would you use to record this divine-like tuning sound?’ And he and Thom [Yorke] had been playing a lot of weird ambient stuff at the time and so, amazingly, they just unloaded tons and tons of files to us of these sound experiments that they had been doing. We just listened to them in awe until John [Curran] eventually got John O’Brien to come in and see what he could make of it.”

What did Mr. O’Brien make of it? Watch Stone’s trailer below, featuring a dark, moody score. What do you think? Tell us in the comment section.