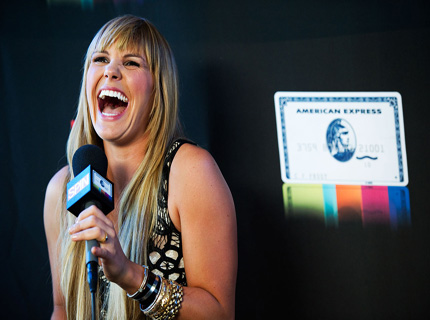 During this year’s Austin City Limits Music Festival in Austin, TX, artists stopped by the American Express® ZYNC ZONE, to chat with SPIN about their summer festival experiences and much more, among them roots-rockers Grace Potter — watch our video interview, plus performance footage below!

Potter has had a busy 2010 touring with her band, the Nocturnals, and is showing no signs of slowing down.In an unlikely pairing, she duets with Kenny Chesney on the country star’s new album, has written the theme song for the upcoming Disney film Tangled (based on Rapunzel), and has been burning up the summer fest circuit.

“Regardless of where you’re at in your career or what you’ve accomplished, a festival is a good way to remind people that there’s still awe,” Potter said.”I don’t ever want to stop playing festivals, it’s extremely important for us as a band.We’re the Nocturnals and that’s how we roll.”

See our exclusive interview with Grace Potter below, and click here to check out more interviews from the American Express® ZYNC ZONE!Scalable, non-watermarked