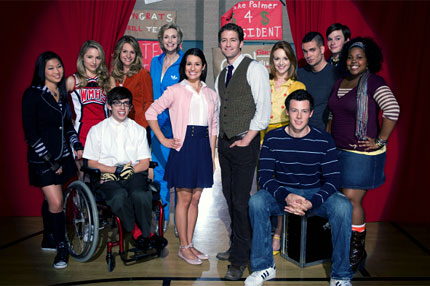 With this week’s edition of the Billboard Hot 100, FOX’s smash show Glee has set a new chart record. The cast have surpassed the Beatles for the most appearances among non-solo acts in the chart’s 52-year-history, Billboard reports.

The Glee cast have scored a total of 75 Hot 100 entries on the chart, beating out the Beatles 71 charted songs, which puts Glee at No. 3 on the list. Only Elvis Presley and James Brown have had more appearances on the Hot 100, with Presley scoring 108 and Brown earning 91.

So far, the Glee cast has sold 2.8 million albums and 11.5 million downloads, according to SoundScan. Interestingly, Glee has earned hits with their own take on Beatles songs, including covers of “Hello Goodbye” and “I Want to Hold Your Hand,” which premiered on the October 5 episode.