The British comic tackles the life of the Queen frontman in new movie. 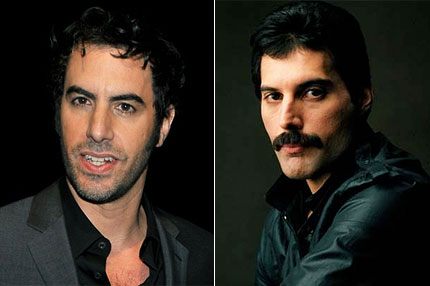 He’s earned a rep playing outlandish characters Borat and Brüno, but Sacha Baron Cohen looks to be taking on more serious projects: the British comic is set to star in a new biopic about Queen’s Freddie Mercury, Deadline reports. The movie will be written by Peter Morgan, who penned biographical scripts for Frost/Nixon and The Last King of Scotland. Production is set to start in 2011.

Queen’s surviving members – Brian May, Roger Taylor, and John Deacon – have given approval for the use of the band’s music in the movie – the first time they’ve allowed such use for a film. It’s unclear whether Baron Cohen will sing the songs, or whether Mercury’s voice will be used instead.

Still, financers for the movie are thrilled with the casting decision. In a statement, backer Graham King said, “Queen is one of the greatest rock bands of all time, and a music brand all unto itself. Freddie Mercury was an awe-inspiring performer, so with Sacha in the starring role coupled with Peter’s screenplay and the support of Queen, we have the perfect combination to tell the real story behind their success.”