New Jersey rockers announce 11-date tour and talk about album for next year. 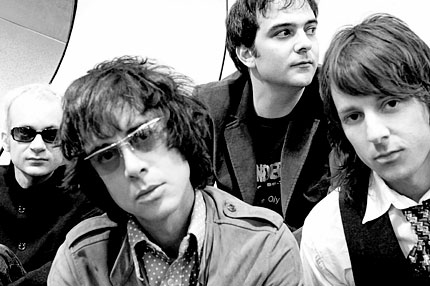 On September 30, Fountains of Wayne will return to the road with an 11-date tour, including a stop at this year’s Hardly Strictly Bluegrass Festival in San Francisco. The New Jersey crew are also prepping another album of power-pop awesomeness – their first album since 2007’s Traffic and Weather. Marshall Crenshaw and Jill Sobule are set to open up for the band; check out the tour dates below.

While FoW plan to release their new album next year, the band is still shopping for a label.”I hope it’s soon, because football season is starting and soon I will be too preoccupied to concentrate on anything,” singer-guitarist Chris Collingwood said in an interview. “If we sign with a label, we will have to fit into their release schedule, making it even harder to say,” he added, suggesting the band may release the album on their own.

The band’s business future may be up in the air, but Fountains of Wayne are clear about the sonic direction of the new album. Expect the set to feature plenty of fist-pumping anthems like their 2003 classic “Stacy’s Mom.” “Our manager told me when he heard it, ‘Well, it sounds like you guys,'” said Collingwood. “That’s a little oversimplified but he has a point – as long as it’s the four of us, it’s going to sound like us.”