Chromeo Team Up With Vampire Weekend 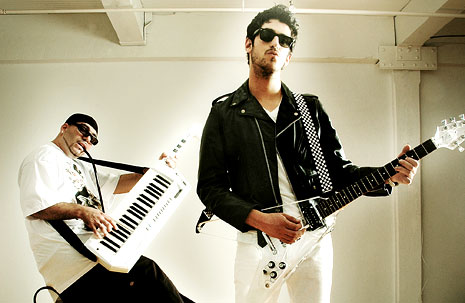 Synth-pop duo Chromeo have tackled Vampire Weekend’s music before, remixing “The Kids Don’t Stand a Chance” from the band’s 2008 debut, but Chromeo’s Dave 1 and P-Thugg haven’t properly collaborated with the preppy crew – until now.

On the iTunes special edition of their just-released album Business Casual, the duo team up with VW frontman Ezra Koenig for a poppy jam that sounds like a long-lost Hall and Oates. (That influence makes sense: Chromeo teamed up with Daryl Hall for an episode of his web show Live From Daryl’s House in 2008.) Stream the song below or buy it at iTunes now!

“It goes into serious yacht rock [terrain] with the harmonies,” Dave 1 tells SPIN of working with Koenig. “That dude, he’s one of my really good friends and he’s a serious singer. That was a musical challenge for us where we do a track where I sing alongside that guy.” Still, Dave 1 manages to hold his own, trading lines with Koenig about a girl that makes him “wanna shout it out at the top of [his] lungs.”

Chromeo will gear up for a tour this fall, with dates to be announced soon, but in the meantime, they’ll hit up the Virgin Festival in Columbia, Maryland, on September 25 and DJ the after party for Vampire Weekend’s New York City gig on September 17.

LISTEN: Chromeo, “I Could Be Wrong (feat. Ezra Koenig)”