"I haven't felt this exposed in over seven years," admits the Killers frontman. Listen to five clips from Flamingo now! 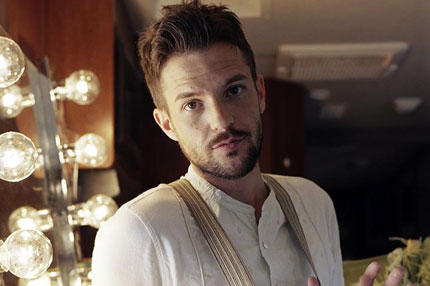 While his band the Killers take a much-deserved break from recording and touring, singer Brandon Flowers is launching a solo career with the September 14 release his debut album, Flamingo. But the 29-year-old known for his haute fashion sense (mascara, glitter, feather-covered shoulder pads) has come to an unsettling realization: He’s on his own.

“I haven’t felt this exposed in over seven years,” Flowers tells SPIN.com, referring to the Killers’ formation in 2002. “At first I thought [going solo] would be this liberating thing, and now I’ve come to realize that it’s nice to have the guys there with you going through the experience. I have a renewed admiration for the band.” His first solo show just last weekend was particularly nerve-racking: “It was nice to finally get that out of the way,” he says.

Flamingo is a new step for Flowers, but its theme is inspired by something he knows well: Sin City. “It’s about the experiences I’ve had with Las Vegas,” he says of his hometown. “A lot of my life took place on Flamingo [Road]. It’s part of Vegas mythology, and now it’s part of my own mythology. My first job was at a golf course on Flamingo. Sam’s Town [a casino that inspired the title of the Killers’ 2006 album] is on Flamingo. I met my wife at a clothing store on Flamingo. That’s my ‘hood.”

Flowers wrote the bulk of Flamingo’s 10 tracks “on a cheap Yamaha keyboard on the bus” during the Killers’ Day & Age tour, and he recruited producers Daniel Lanois (U2, Neil Young), Stuart Price (Madonna, Kylie Minogue), and Brendan O’Brien (Pearl Jam, Bruce Springsteen) to help focus the more experimental direction of the songs. “There are some western elements,” he says. “There’s a gospel tune. We brought in some castanets and other instruments that lend themselves to that sound, which stems from people like Johnny Cash and Elvis. Those influences definitely crept their way in.”

The album opens with “Welcome to Fabulous Las Vegas” (listen below), an anthem to the iconic sign that greets travelers driving into the city. “People would dodge cars to take a picture by it, so the city finally made a parking lot by it. It’s that combination of being so happy while dumping all their money. It’s definitely not a perfect town, so that was the perfect place to jump from.”

Flowers says the album’s most ambitious track is “Swallow It” (listen below), a new wave-y ballad with gliding guitar and synths. “There’s a fair amount of experimentation on that song, but it’s still very much a pop song. I’m so proud of that one. That’s what I admired so much about bands like the Beatles. When they did experiment or go out on a limb a little bit, it was still accessible, it still made the world go ’round.”

Listen to exclusive 45-second preview clips of “Welcome to Fabulous Las Vegas” and “Swallow It,” plus “Was It Something I Said?,” “On the Floor,” and “Magdalena” below, then tell us what you think in the comment section!

LISTEN: “Was It Something I Said?”

LISTEN: “On the Floor”