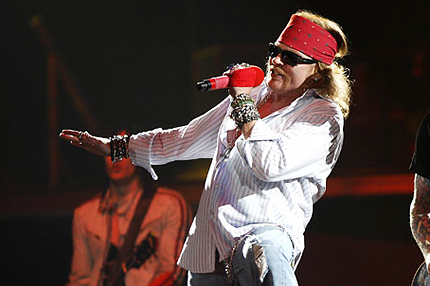 The Rock N’ Rev festival is set for August 9-13 at Sturgis’ Monkey Rock USA, and, in addition to lots of leather jackets and bike exhaust, the festival will features performances from Creed, Godsmack, Stone Temple Pilots, 3 Doors Down, Cage the Elephant, and others.

Though the festival will be the band’s first official U.S. show since 2006’s Chinese Democracy Tour, the group did play a surprise gig this February for some 150 lucky fans at the Gramercy Park Hotel’s Rose Bar in New York City that featured a 90-minute, 16-song set loaded with hits.

Tickets to the Rock N’ Rev festival are currently on sale via Ticketmaster.Day passes are going for $45, and a number of VIP packages are available, some of which include on-site motorcycle parking, allowing fans to “watch the festival from your motorcycle” — Paradise City, indeed!

Is it worth heading out to South Dakota to see Axl? Sound off in the comments section!