The Brooklyn dance-punks explain how they got their name. 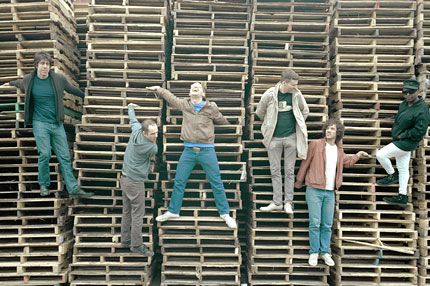 This week: Rave-influenced rockers !!!, whose new album Strange Weather, Isn’t It? is out August 24.

Why !!!: “We were sitting on a porch in Sacramento back in, like, 1996, and just throwing around names,” says singer Nic Offer. “Tyler [Pope, the band’s guitarist] was talking about how in the movie The Gods Must Be Crazy these African tribesman had names with an exclamation mark in them and it was pronounced as a clicking noise. Then we thought it would be funny if we called ourselves !!! and people could just associate whatever three sounds they wanted with the name. At some point people started pronouncing it ‘Chk Chk Chk,’ which looks weird to me when I see it written out. Either way, our label is still trying to get us to change our name. I think they’ve got some sort of system where the employee who eventually convinces us to change it gets a big bonus.”

Previously Rejected Names: “We were looking at Totally Wired, which is also the title of a song by the Fall. I was pushing for Piranha Pants at one point. But the other guys pushed much harder against it.”

Best Band Names Ever: “I like Born Against. I remember thinking that I really wanted to wear a patch that said Born Against on it.”

Worst Band Name Ever: “It’s not bad, but sometimes names that seem like they’re part of a trend can be a bit boring. Like ten years ago every band was ‘The’ something — The Strokes; The White Stripes; The Cribs. Then it switched to three related words — Hot Hot Heat; Yeah Yeah Yeahs. Now the thing is having one word with an ‘s’ on the end, like Wavves. But I guess trends are inevitable.”