Ezra Koenig talks about his favorite festivals, why Palm Springs is so weird, and why festivalgoers need protection. 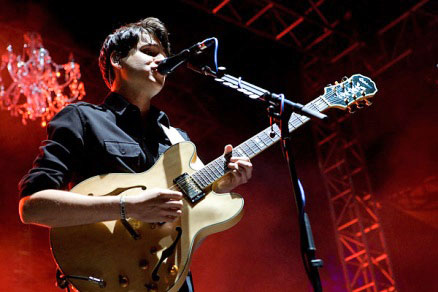 Our drummer [Chris Tomson] went to the very first Bonnaroo, and he used to follow Phish around, so he could tell you some stories. But where I grew up [in New Jersey], I was pretty far away from any place that held big sleepover festivals, so I never really learned how to say, “I can’t shower for days, I might as well embrace being dirty.”

I can get down with Sasquatch, though. The Gorge, where Sasquatch is held — everybody tells me it’s beautiful. It’s this big outdoor amphitheater built into the natural rock, and many of those natural amphitheaters were WPA projects, so they have a cool history.

But Coachella is my favorite because Palm Springs is one of the weirdest places on earth. In the ’50s, it was this getaway for the Frank Sinatra–type show business elites, but now it’s all Hollywood types and senior citizens, all stranded in the middle of the desert. Everyone rents a house, so there’s all these bizarre gated communities surrounded by radio towers, and you drive around between them, looking at green lawns and sprinkler systems, but nobody’s walking anywhere, so you won’t see another human being for miles. It’s like some air-conditioned nightmare. Last year I remember seeing a coyote and feeling that I shouldn’t be there.

As far as festival advice goes, I would say definitely bring earplugs. I know that sounds obvious and lame, but if you’re pressed up against a speaker, it’s not worth going deaf — no matter how much fun you’re having at the time. So be mindful of your ears.