Live Video from Austin: Minus the Bear Unplugged! 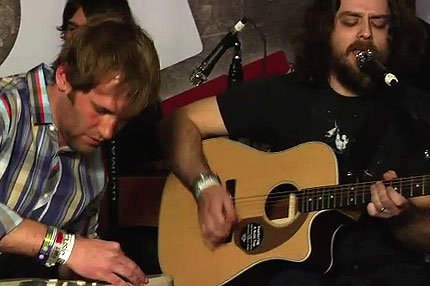 When you’re spending four days in Austin, Texas, seeing loads of ear-pounding rock’n’roll, it’s always a pleasure to turn down the volume and see some festival artists play in quieter, stripped-down settings. That’s what happened at the SPIN/MySpace Music Loft on 6th Street when heady Seattle rockers Minus the Bear popped in to play two brand new songs. Watch below!

While some acts coming by the Loft chose to simplify their setup, Minus the Bear brought their entire lineup, and packed keyboards, an Omnichord, guitars, bass, and percussion onto our tiny stage. Even better: They played two cuts from their forthcoming album, Omni, which doesn’t hit record stores until May 4. The quintet pulled out all the stops for “My Time,” recreating all of the album version’s synthy goodness, but did a more subdued, coffeehouse-ready rendition of “Hold Me Down.”

It all sounded great — not surprising considering the band reworked a number of songs from its catalog for 2008’s Acoustics EP.

Check out the video below, and visit minusthebear.com for full tour dates — the band starts a big trek April 19 in Spokane, Wash., that includes an appearance at New Jersey’s Bamboozle festival in May.