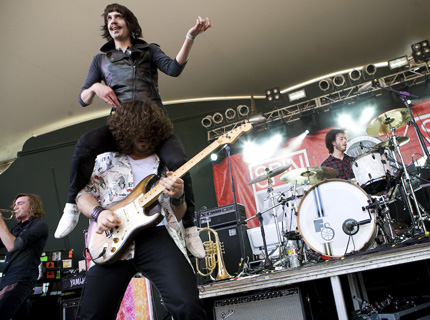 Between their bombastic brand of glam-inspired, theatrical rock and frontman Eric Nally’s utterly captivating stage presence — he scaled the roof at Stubb’s during the band’s set, causing a few heart palpitations among his bandmates — Cincinnati-born band Foxy Shazam is ready for the big time, and proved as much with a stirring, party-opening set at SPIN’s annual party at Stubb’s BBQ in Austin, Texas, on March 19.

Just after they wowed with their live performance, SPIN.com’s Peter Gaston caught up with Nally and horn player Alex Nauth to chat about stage acrobatics, rock star mystique, their inclusion in SPIN’s 10 to Watch in 2010 list, hearing their music in the Super Bowl telecast, and much more.