Courtney Love brings her new band to Austin's SXSW and puts on one helluva set. 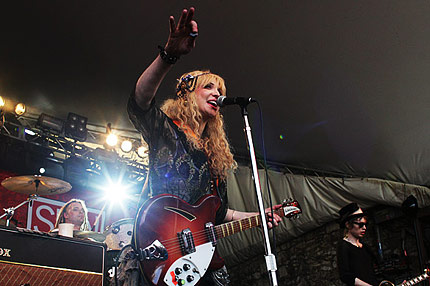 As if the capacity crowd at the SPIN 25 party (presented by RockBand and MySpace Music) at the South by Southwest Music Festival needed any warning: The Hole frontwoman has kept friends and foes on their heels for the better part of two decades. And most who angled their way onto the list for one of 2010’s hottest tickets – Hole’s first North American show in more than a decade – came expecting some sort of spectacle, maybe even a train wreck.

They got neither. With Love leading an entirely new cast of co-conspirators, Hole delivered a muscular and saw-toothed 50-minute set that reaffirmed her status, even at age 45, as rock provocateur. Maybe that sash should have read “MISS BEHAVE.”

For all Love’s naughty bits, and there were several, Hole previewed six songs off its forthcoming album, “Nobody’s Daughter” (April 27), material that ranged in style from the sandpapery thrash of the band’s early days to more contemporary rock stomps to a 1980s-styled slow burner.

“This is what Bret Michaels would call a power ballad … I want to get on the bus with Bret and drive into the sunset,” Love said, introducing “Letter to God,” a Linda Perry-penned anthem that, like Hole’s most accessible material, sees the singer baring her scars.

Not that she stayed in the song’s character long. “Thank you,” she told the crowd afterward, feigning wiping away tears. “That took a lot out of me.”

If a certain audience has always seen Love as damaged goods, she at least has the moxie to confront it. Her signature snarl and startling scream may have lost a decibel or two, but they still felt like sonic exclamation points in new songs “Skinny Little Bitch” and the album’s title track. The former is a thrashy punk rocker, in your ears and in your face all at once. “Nobody’s Daughter’s” power chords seemed to give Love the strength to solicit adulation from the crowd, and on Friday they obliged.

The new song “Pacific Coast Highway” proved quite an excursion.”Remember “Malibu?” Love said, introducing it. “This isn’t it; this is side 2.” In the mid-tempo rocker, she acknowledged “miles and miles of regrets,” but afterward, Love allowed, “I like that song – it reminds me of hate sex … you know, the kind where you punch somebody right in the middle of it.”

It got even edgier at the end when Hole closed with “Honey,” a brash rocker that Love promised would be a radio hit. And “Samantha,” a brawny, accusatory song about a working girl who “wraps her legs around the world” and features a shout-along chorus that goes “People like you / Fuck people like me.”

It’s the sort of blunt fusillade that has made Love an iconic figure to some and a tragic one to others.

And if nothing else, Hole’s new material fits snugly into its catalog – which on Friday included some moments that brought roars of recognition from those who abided the 1990s.

At the start, Love and her new bandmates – guitarist Micko Larkin in the spot formerly occupied by co-founder Eric Erlandson, bassist Shawn Dailey, drummer Stu Fisher, and second guitarist Invisible Dave – reached back almost two decades for the title track from Hole’s debut “Pretty on the Inside,” conjoining it with “Sympathy for the Devil.” They also dipped back for “Reasons to Be Beautiful,” “Violet,” and “Miss World.”

But the SPIN 25 party wasn’t wholly about Hole. A lineup as eclectic as the South by Southwest Festival itself kept the mood upbeat on a sunny, breezy Austin afternoon.

Just before the headliner took the stage, Sharon Jones and the Dap-Kings delivered a sweet soul dance party. Jones was as bright as her sleeveless yellow dress – she and her eight sharp-dressed cohorts simply wouldn’t let anybody have a bad time, including Gym Class Heroes frontman Travie McCoy, whom Sharon invited onstage to dance.

Perhaps the show-stealer, though, was Fucked Up, the Toronto sextet whose frontman, Damian Abraham, has become quite the round mound of renown. The band’s bruising hybrid of punk rock and hardcore centered around Abraham, a big, hirsute man who not only screams a lot but does it from very close range. He was into the crowd by the second song Friday, and shirtless by the third. “It’s gonna get so much weirder though,” he told the crowd. “I promise you when this set is over we won’t be able to look each other in the eye.”

Well, maybe not with a straight face. Abraham emptied water bottles into the dirt area in front of the stage, stripped to his skivvies and rolled in the mud. “This is what I looked like when I first saw Hole in 1994,” he joked. He roared half-menacingly through the spectators brave enough to stay in the vicinity, gave mud hugs to a few and then asked fans to douse him with water to wash the grime off. All in good fun.

Fucked Up’s set was bookended by the earnest, harmony-laden guitar pop of California quintet Rogue Wave and the warm synth-pop of Miike Snow. Outrageous isn’t either’s style, but melodies that stick to you like shadows are. Most memorable were “Sleepwalker,” off Rogue Wave’s new album “Permalight,” and Miike Snow’s “Silva” from the band’s 2009 debut.

Foxy Shazam got the afternoon started with its kitschy updated glam.

Stubb’s indoor stage featured short sets from a host of up-and-comers, with hometown guys Harlem delivering a too-short set of chunky garage rock at the top of their lungs and from the bottom of the hearts, and California hip-hop ensemble Audible Mainframe ripping it up with slick rhymes and live instrumentation. U.K. quintet Goons of Doom’s snarling guitar assault leaned toward kegger rock, while Free Energy’s classic came, at least, with a fresh indie attitude.

Kevin Bronson
Tags: courtney love, Hole, We Were There