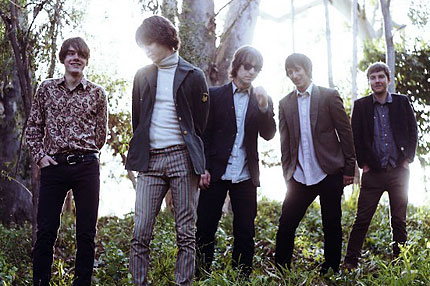 In July 2009, guitarist Ryan Ross and bassist Jon Walker exited Las Vegas’ Panic! at the Disco due to “musical differences” — and now, eight months later, we know exactly what they meant.

The duo are currently finalizing a record deal for the summer release of Take a Vacation, their debut album as the Young Veins — and their new sound is far from the theatrical emo-pop of their former band. For proof, listen an exclusive SPIN.com premiere of album track “Young Veins (Die Tonight)” below.

“It’s a song about having a good time with your friends,” Ross explains of the two-minute song, which is heavily influenced by 1960s British Invasion guitar rock and California bands like the Beach Boys and the Mamas & the Papas.

The track opens with a snappy drum roll and sparkling guitar combo, then explodes in an sunny sing-along with Ross hitting the high notes: “Is young a word for dumb? / A word for fun / We have the time of our lives every night / Like it’s our job to lose our minds!“

It’s a good-time anthem to Ross’ adopted home of Los Angeles, but the 23-year-old rocker explains there’s a double meaning. The verse — “If I were to die tonight, would you cry? / My place in your life / I’m aware that you’re scared” — was “written with a girl in mind.”

“It’s like, ‘does this person care about me as much as I care about her?’ says Ross. “Sometimes when you’re writing a song, even if you know what you want it to be about, it ends up being about whatever is really affecting you at the time.”

Does This Panic! at the Disco Song Remind Anyone Else of Lil Wayne?