On classics and new songs from the band's April release, one thing remains the same -- it's all about Courtney Love. 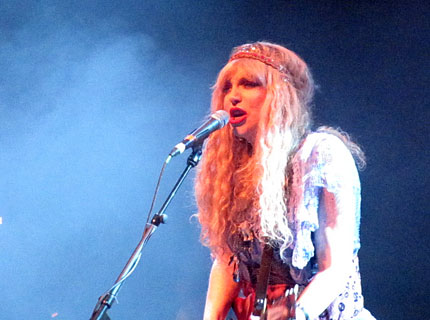 Courtney Love strides onto the stage at London’s Shepherd’s Bush Empire Wednesday night dressed like a dishevelled prom queen, and launches her band Hole straight into a raucous version of the Rolling Stones’ Sympathy For The Devil.

It’s the first show for one of rock’s leading female lights, who has formed a new version of her band and is preparing to release a record, Nobody’s Daughter, in late April.

Love, now 45, is the only original Hole member left, and though the new recruits — all guys — have names and ages and idiosyncrasies of their own, it’s difficult to remember them, and you are not entirely convinced you even have to bother. With Love at the microphone, it’s hard to look anywhere else.

Much of Hole’s 60-minute set focuses on songs from the upcoming release, a daring move since none of the 2,000 rapt fans at the sold-out venue have heard them.

“Skinny Little Bitch” is as provocative as the title suggests, Love’s voice a bag of rusty nails over a melody that shows off its sweet hook.

And “Letter To God” is a highly wrought ballad that she delivers at the very moment her heavy eye makeup starts to run, turning both cheeks into Rorschach inkblots.

You can tell Love is out of practice, but this serves only to endear her to the partisan crowd all the more. “This song is a bitch to remember,” she says several times during the set, before referring to a teleprompter to remind her of the words.

At one point, she holds her hand up to show that all this guitar playing has made her fingers bleed.

But it’s when Love falls back on career highlights that things really heat up.

“Doll Parts” is as dispassionately thrilling as it was 16 years ago. Likewise “Malibu,” while “Celebrity Skin” reminds that, once, she was known for music, not just soap opera. At its climax, the crowd chants: “Courtney! Courtney! Courtney!”

But then she plays a climactic “Never Go Hungry” — by herself on an acoustic guitar — that sounds as vulnerable as the woman herself. At this point, it’s hard to remember much of anything about the rest of Hole.

It’s all Courtney up there, just as it ever was.

Nick Duerden
Tags: courtney love, Hole, We Were There