Download the first track from Walter Schreifels' surprisingly mellow solo album, and watch the video, too! 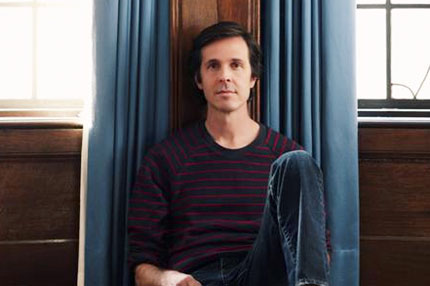 “Arthur Lee’s Lullaby,” a homage to the late frontman of ’60s psychedelic band Love, is the first cut released from An Open Letter to the Scene, Schreifels’ debut solo album, which is due May 4.

The song is the Berlin-based Schreifels’ most vulnerable work to date — replete with clever word play and unexpected chord changes that most closely resemble the indie-pop exploits of his mid-’00s quartet Walking Concert.

The video, which you can watch below, is equally charming: The low-fi clip depicts the singer chasing two sundress-clad girls through a colorful enchanted forest, filled with shots of glitter over a golden sunset. Quite a shift for the man whose band wrote eardrum-blasting cuts about procrastinating loners in the late-’80s.

What do you think of the kinder, gentler Walter Schreifels? Sound off below.