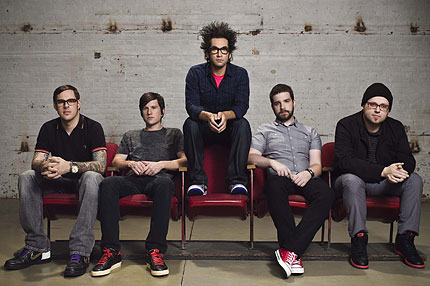 Minneapolis pop punk quintet Motion City Soundtrack are back with their Mark Hoppus-produced fourth album (and major label debut), My Dinosaur Life — and you can listen to an exclusive stream below of “Her Words Destroyed My Planet,” the second tune to be previewed from the album!

“This is the most honest song I’ve ever written,” says frontman Justin Pierre about the cut, which describes “some J.J. Abrams alternative universe reality type shit” about what direction his life might have taken had an ex-girlfriend not broken up with him three years ago.

“There are [people] that I’ve run into that blame the direction or outcome of their lives on a single incident,” Pierre tells SPIN.com. “This idea has always fascinated me.”

“Had the woman not split up with me, I would most likely not have spiraled out of control to the point of no return, which allowed me to start over from scratch,” the singer/guitarist explains. “What seemed like a tragedy three years ago turned out to be the best thing for both parties involved.”

Another fun fact about the song: In its first verse, Pierre sings about falling asleep watching Veronica Mars, a reference to the moment he began to write the tune. “I had just finished watching the final season of Veronica Mars on DVD, so I was relatively upset that there would be no more episodes,” Pierre recalls.

Listen to “Her Words Destroyed My Planet” below — it’ll be available for download via iTunes starting tomorrow (Dec. 1). My Dinosaur Life is out Jan. 19.