Bradford Cox, a.k.a. Atlas Sound, is at his most fragile and poignant on his new release. 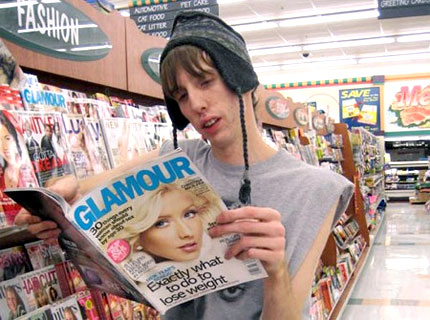 Bradford Cox is a restless artist. The breakout Atlanta native ceaselessly performs and writes and records woozy shoegaze and electronic music as both Deerhunter and Atlas Sound, and has collaborated with the likes of Stereolab, Animal Collective, and the Black Lips.

But with his latest release as Atlas Sound he’s going another direction: Solo acoustic. Download new original song “The Screens,” plus “Doctor,” a cover of doo-wop group Five Discs, over at Cox’s blog.

The new tracks mirror Cox’s recent acoustic Atlas Sound gig at ATP — a total 180 from the ambient sound of his latest release, Logos, and other shows he played in its support.

“The Screens” is a gorgeous acoustic ditty, allowing Cox’s fragile voice to lead, rather than drowning it in ear-rattling reverb. Over the pitter-patter of a hand drum, Cox softly croons about death and losing track of time, and blows on a harmonica. It’s a new sound from Cox — and it lets his affecting songwriting and voice shine. “Doctor,” meanwhile, picks up the pace a bit, with Cox pounding his acoustic and transforming the song into a stripped-down rock tune.

Download the two new tracks. Are you absolutely loving “The Screens”? We are. Tell us what you think in the comment section.