Hear a new collaboration between the DJ and the folk-metal collective. 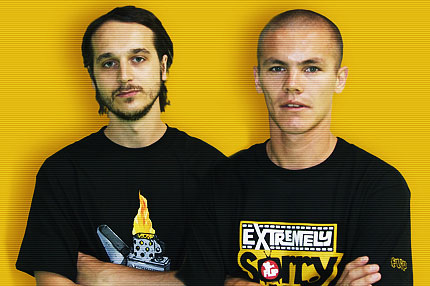 Skaters and metalheads are natural co-conspirators — nothing quite pumps you up for the half-pipe like raging guitars and shouted vocals. British-born, California-living DJ Baron understands this.

Accordingly, his soundtrack to the upcoming Flip Skateboards thrills’n’spills skate film Extremely Sorry (Volcom) features his collaborations with metal icons like Motorhead’s Lemmy Kilmister, Slayer drummer Dave Lombardo, and Canadian folk-metal beardos Black Mountain, whose most recent album, 2008’s In the Future was one of the year’s crunching highlights.

You can download the result of Baron and Black Mountain’s efforts, “The End of the Beginning,” below. Featuring a probing, almost noirish guitar line and spacey synth effects, the track is probably closer to standard Baron territory than Black Mountain’s typical Sabbathian pastoralia, but no less mind-altering. Give it a whirl, and tell us what you think.