The pugnacious pop diva kicks off her tour with a warning to Kanye, classic rock covers, and a big vat of goo. 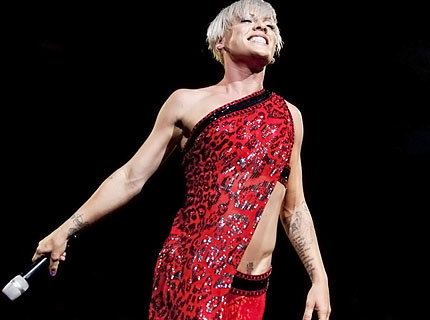 Amidst the mega-budget spectacle of Pink’s tour kickoff in Seattle on Tuesday night, the most prominent feature was Her Pinkness, herself. During a two-hour, turbo-charged performance at Key Arena, the platinum-blonde powerhouse overshadowed trapeze dancers, huge inflatable harlequins, Broadway-worthy choreography, and a pillow fight (!), wowing the packed crowd with her charisma, athleticism, and — most disarming of all — sense of humor. “Can you imagine if that was my speech?” she said mid-set about Kanye’s interruptive outburst at the VMAs two nights ago. Then she mentioned something about brass knuckles.

A week ago it was announced that the concert had been moved from a smaller venue to Key Arena to accommodate increased ticket demand, and it was tough to imagine how such an elaborate production could’ve managed anywhere else. For her opening number, Pink emerged on a wire from beneath a catwalk jutting from the front of the stage. As she descended, costumed dancers whooshed down a pair of playground-style slides and fell into line beside her, and the band, which at times swelled to seven players, was revealed from behind a curtain on-stage.

The ensemble then swung into “Bad Influence,” one of several songs from 2008’s Funhouse, as Pink shed her outfit piece by piece until she was strutting through “Don’t Let Me Get Me” in pink leopard-print lycra. “Last night I separated my shoulder,” she said, somehow giddy and confident at the same time. “It hurts a lot but there was no fucking way I was gonna cancel this show. The louder you are the less pain I feel.” She must have been feeling pretty good.

Even Pinks flubs were charming. Backed by just a baby grand piano, she started “Family Portrait” by fumbling the lyrics. Her recovery: “See what happens when you don’t freakin’ lip synch?” Later, backed by two guitars, upright bass, cello, and violin, she sang the moving “I Don’t Believe You” and then sauntered back to took the front of the catwalk for “Dear Mr. President.”

For her encore, she was lowered by trapeze into a vat of unidentifiable goo. She emerged wet and dripping and singing “Glitter in the Air,” the lovelorn ballad that closes Funhouse. As far as pop music baptisms go, this one wasn’t the classiest, but as with so much that Pink does, the sheer moxie of the move was impressive, audacious, and almost impossible not to enjoy.

Set List:
Bad Influence
Like a Pill
I Know Better
Don’t Let Me Get Me
I Touch Myself (Divinyls cover)
Please Don’t Leave Me
You And Your Hand
Leave Me Alone (I’m Lonely)
So What
Family Portrait
I Don’t Believe You
Dear Mr. President
Trouble
Babe, I’m Gonna Leave You (Led Zeppelin Cover)
Sober
Bohemian Rhapsody (Queen cover)
Funhouse
Crazy (Gnarls Barkley cover)
Get the Party Started
Glitter in the Air

Jonathan Zwickel
Tags: pink, We Were There