“I’m sooooo sorry to Taylor Swift and her fans and her mom,” West wrote, in all caps, on his website. “She is very talented. I like the lyrics about being a cheerleader and she’s in the bleachers! I’m in the wrong for going on stage and taking away from her moment.”

Swift was onstage accepting the night’s first award, for Best Female Video, when West interrupted, grabbing her microphone, and saying that Beyonce’s video for “Single Ladies,” which didn’t win, was one of the best videos of all time. MTV producers cut to prerecorded footage of Tracy Morgan while Swift tried to regain her composure and finish her acceptance speech, but she was unable to do so. 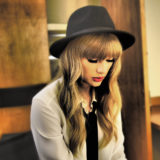 Later in the night, when Beyonce did earn a moon man for Video of the Year, she graciously invited Swift to come back onstage and have her moment.

West, meanwhile, went home to watch “the show at the crib right now cause…well you know!”

Even within his apologetic blog posting, though, West still hyped Beyonce’s “Single Ladies” video: “Beyonce’s video was the best of this decade!!!! … You [Taylor] are very talented!!! I gave my awards to OutKast when they deserved it over me…that’s what it is!!!”

UPDATE: West issued another apology Monday afternoon on his blog, saying, “I feel like Ben Stiller in ‘Meet the Parents’ when he messed up everything and Robert De Niro asked him to leave. That was Taylor’s moment and I had no right in any way to take it from her. I am truly sorry.” Monday night, the rapper appeared on the debut episode of The Jay Leno Show, apologizing for his actions in an emotional interview with the TV host. Watch video here.

What do you think? Is Kanye’s apology sufficient? Sound off below. And here’s the video of Taylor interrupted: