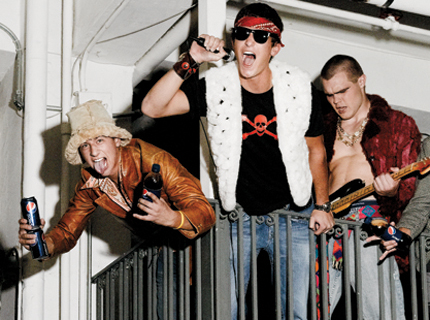 Playing Rock Band is fun all by itself, but when Pepsi asked music fans nationwide to make their own music video featuring Rock Band and offered an awesome grand prize — an MTV Video Music Award for Best Performance in a Pepsi Rock Band Music Video, ten passes to the VMAs, and the opportunity to walk down the red carpet — ten recent high school grads from Springfield, Illinois, rose to the challenge.

A rendition of Lit’s “My Own Worst Enemy” by Matt Hartzler, Jake Giganti, Taylor Blake, Charlie Clausner, Mitch Falter, David O’Brien, Ben Parks, Shane Reynolds, Mike Ranos, and Alec Veldhuizen was the winning submission. The group filmed themselves as “rockers” and “nerds” at a rock concert filled with Pepsi drinking games and fireworks — and Rock Band instruments, of course.

In addition to winning a “moonman” trophy for Best Performance in a Pepsi Rock Band Music Video and all the aforementioned goodies, the winners also stepped in front of the cameras for a photoshoot that’s featured in SPIN’s November issue. Check out some outtakes from the shoot here!