All Tomorrow’s Parties: The Best & Worst 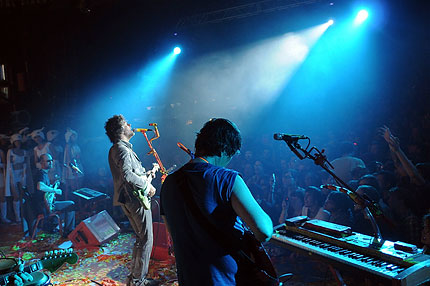 For its second year in the U.S., All Tomorrow’s Parties — a festival popularized in the U.K. — returned this past weekend to Kutshers Country Club, a family vacation spot 90 minutes outside New York City in the Catskill mountains near Monticello, NY. The club — the site that inspired Dirty Dancing — is an all-inclusive resort, still furnished in 1970s decor, with video game arcades, smoking lounges, a movie theatre, a mess hall, ski lift, bar, pond, golf course, and over 400 hotel rooms, plus nearby bungalows, that all recall the eerie desolation of The Shining.

Tickets are limited — roughly 2,000 were sold — making ATP a festival experience like no other, one for the nerdiest of music fans, those who are more interested in trading notes about Merzbow b-sides than hot-boxing a Honey Bucket at Bonnaroo. Lines are non-existent; it’s easy to find a spot up-close to the stage to watch your favorite band; the beer is plentiful; there’s seating outside by the pond; and artists wander about with the normal folk, chatting up strangers (Jim Jarmusch), walking really fast between the indoor stages (Maggie Gyllenhaal), or tackling their friends (Crystal Castles’ Alice Glass). The security even adopt the sentiment of debauched camp counselors: “Be sure to drink too much!!!” one instructed fans at the front entrance.

BEST BEAVER SHOT: FLAMING LIPS
A dancing golden girl on the video display during the Oklahoma band’s fest-closing set Sunday turned into a cosmic goddess as she lay down on the screen, parted her legs, and in a flash of kaleidoscopic strobes, proceeded to birth the entire band, capping with Wayne Coyne’s emergence in a giant plastic bubble. — ANDY BETA

BEST WAY TO ANNOUNCE A HIATUS: DEERHUNTER
Midway through Cox’s second appearance of the day, this time with his main outfit Deerhunter, the frontman addressed the crowd with some important news: “This is our last show for a long, long time. We’re going to devote time to some other things.” What those “other things” are remain unseen (another album from the Atlas Sound, his side-project which performed earlier in the day, perhaps?), but the southern shoegaze/punk rockers made sure fans will miss them in the interim: Their performance was loud enough and such an ethereal experience that My Bloody Valentine should be jealous, especially when it comes to “Microcastle” and “Cover Me,” which had Cox’s vocals sounding like an angel singing from deep inside a shorted-out computer. — WILLIAM GOODMAN

BEST COVER SONG: PANDA BEAR
Keeping the packed Stardust Ballroom enrapt from start to last note, Panda Bear (a.k.a. Noah Lennox from Animal Collective) played new songs and exquisite highlights culled from Person Pitch. The highlight remained a rendering of a deep cut from his band’s triumphant Merriweather Post Pavilion. Lennox dubbed out “Guys Eyes” to the point that the bass became scalp-shaking, while kaleidoscopic light patterns and the world’s scariest little dog were projected on the screen behind him. — AB

BEST CONFUSION-INDUCING JAM BAND: AKRON/FAMILY
Nowhere was the Flaming Lips’ influence as curator of ATP felt as much as with Akron/Family’s set. The Brooklyn-based band is sonically schizophrenic, leaping from Grateful Dead-style jazz jam outs, to unhinged, Tom Petty-on-acid country rock, to plain weird computer drones with djembe drum rhythms. It’s a lot of sound from a three-piece band, and just when they drift into looping aural non-sense, the boys switch directions, which, with the set-closing song, found bassist/singer Miles Seaton hollering like an Apache at war and slamming the microphone against his chest over blitzkrieg hardcore punk. — WG

BEST ONSTAGE DANCING: DAVID YOW OF THE JESUS LIZARD AND FAN
When deranged-derelict frontman David Yow wasn’t sneering “HAPPY 9/11 DAY EVERYBODY!” to the crowd, his reconvened band the Jesus Lizard fomented the most stage-diving and crowd-surfing. Drawing heavily from their early 90’s Steve Albini-recorded classics Goat and Liar, oft-times Yow pushed surfers back into the maw (and one in particular he made sure to tuck his shirt in waaaay down the front of his trousers). But the diminutive Yow then played the gentleman, taking a moment to tango with an Amazonian brunette to the slide guitar of “Lady Shoes.” — AB

BEST GRATEFUL DEAD MOVE: ANIMAL COLLECTIVE
While this Baltimore, MD-based band recently got approval to sample the Grateful Dead for a new song, their most jam-friendly moment came on revisiting a song from their 2007 album, Strawberry Jam. Taking “Fireworks” to the upper reaches of the firmament, peaking successively for over ten minutes as the band worked the packed crowd of animal-mask wearing kids to a seething, bouncing mass of bodies, dancing in total ecstasy. — AB

BEST IRON MAN PERFORMANCE: KID MILLIONS OF ONEIDA
Kid Millions, long known as the motorik force behind Brooklyn psych-rock mainstays Oneida, pounded along with the Boredums for their building-rattling performance. But once he was done there, he high-tailed it back to the Sportmens Bar at the other end of the complex, where he then proceeded to jam with his band and friends and friends of friends (including Birds of Avalon, Boredoms, and Zach from Hella) for another 12 hours, turning the beat around all the while. — AB

BEST CROWD SURF: TIE: BORIS AND FLAMING LIPS
After Japanese sludge-masters Boris melted cortices with their re-enactment of Feedbacker, drummer Nagata took a victory-lap surf through the crowd as the feedback continued to roar like hellfire. But special mention should also go to the crowd-surfing opportunities nurtured by the Flaming Lips for their finale performance. — AB

BEST COMEDIAN: WARREN ELLIS OF DIRTY THREE
While David Cross would flail and plop over on the comedy stage, the comedy crown goes to Dirty Three’s violinist-monologist-buccaneer-kick boxer-madman Warren Ellis, who even overshadowed the much Tweeted-about presence of Nick Cave onstage, providing somber piano accompaniment. In between the titanic, heart-swelling heaves of their 1998 Ocean Songs, Ellis waxed and rambled on about women, chicks, magazines on the internet, and how the band was not responsible for “emo.” — AB

BEST WAYNE COYNE-SPOTTING: BLUE HORIZON DINER
The gray-suit clad Coyne, a common sight over the course of the three-day festival, was seen running about this Monticello diner (replete with signed Tom Jones photos) with his digital camera, making a little movie based on the restaurant’s Love Meter Machine set up right outside the bathroom. — AB

BEST ENTRANCE: BOREDOMS
Counting eight drummers on-stage, the ninth drummer for the Boredoms’ performance of “BOADRUM” entered like everyone in the crowd did, down the ramp towards the Stardust Ballroom. Only he was atop a drum riser carried by a dozen men that made its way through the crowd as these Japanese sonic visionaries brought to life the gods of thunder. — AB

BEST GIFT-GIVER: EUGENE MIRMAN
After reading from (U.K. Prime Minister) Gordon Brown’s private Hello Kitty journal, and right before a scripted There Will Be Blood customer service call skit involving a dead-on Daniel Day-Lewis impersonation, comedian Eugene Mirman handed out handmade butterfly cards complete with wire antenna to audience members, for them to pass along to their dads. Though sentiments like, “Thanks to you, I’ve never committed a violent sexual act, although I’ve often wanted to,” might not make the best Father’s Day card. — AB

BEST MOVIE IN THE CRITERION COLLECTION SCREENING ROOM: TIE: GIMMIE SHELTER AND HAUSU
The on-screen festival madness of the Rolling Stones descending upon Altamont in 1969 (as expertly captured by documentarians the Maysles Brothers) no doubt inform the insanity of the current ATP Festival, from the rocking music to the freeform setting. But the most inscrutable moment of the first day occurred at the 1:30 A.M. screening of a jaw-droppingly bizarre Japanese horror/tween comedy from 1977, Hausu. Imagine an episode of Scooby Doo mixed with Italo-splatter classic Suspiria and giggly Japanese girls and you’re not even close. — AB

WORST TEASE: ATLAS SOUND
Atlanta’s Bradford Cox wrapped up his shaky but charming 45-minute set by bringing a little country/folk to his ambient rock project with an acoustic rendition of “Shelia,” complete with wailing harmonica. It was a poignant moment, with Cox’s harrowing vocals and bedroom-pop songwriting, and the crowd wanted more — so did Cox. But, sadly, at this indie rock summer camp the counselors rule all: a stagehand shook his head side-to-side when Cox asked for more time to play a tune of his new album, Logos. “Ah, and I was going to play ‘Walkabout.'” Damn those camp counselors, always spoiling all the fun. — WG

WORST JOHNNY CASH IMPERSONATION: ALAN VEGA OF SUICIDE
Coming midway through Suicide’s ear-punishing, epochal, even more skeletal and deconstructed take on their ear-bleeding debut album from 1977, black-clad singer Alan Vega broke into a non-sequitur of an impression of yet another Man in Black. “Hello, Ahm Johnny Cash,” he repeated a few times, before launching back into their classic album. Alas, his impersonation of a septuagenarian who needed a handler so as to not teeter over but who could still whoop anybody’s ass in the room was damned intimidating. — AB