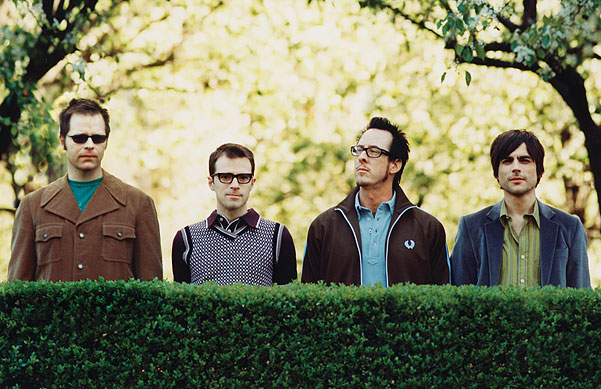 Since Weezer revealed the title of their upcoming album this week, the internet has been buzzing with two questions: “What the heck is Raditude?” and, “Are these guys serious? In a new Billboard.com interview frontman Rivers Cuomo answers both questions and describes the upcoming record, out October 27.

First off, that crazy title. It turns out the name came from Cuomo’s sometime collaborator, The Office’s Rainn Wilson. “He has a super-rock persona,” Cuomo said. “When it came time to find a title for the Weezer album, I asked him what he thought the ultimate album title would be and he said ‘Raditude.'”

Tongue-in-cheek titles are nothing new for the power-pop band — their last album included songs “The Greatest Man That Ever Lived” and “Everybody Get Dangerous.”Raditude’s tracklist — or what exists of it so far — offers one gem after another.We’ve already heard album tracks “I’m Your Daddy” and “The Girl Got Hot,” but now fans can look forward to “Can’t Stop Partying” and “Trippin’ Down the Freeway.” One thing’s for sure: the heart-on-sleeve days of Pinkerton are long gone.

“The sound of Raditude is fun, high energy pop rock,” Cuomo said. “‘I’m Your Daddy,’ has an up vibe with the same, heavy Weezer guitar riff but with a little electro influence. And ‘The Girl Got Hot’ — that’s kind of a witty, party jam.”

A new Weezer album isn’t the only item on Cuomo’s to-do list. Earlier this week he cut vocals for his “Let’s Write A Sawng” project, in which he writes tunes with the help of YouTube followers. “I think it’s called ‘Turn It Up,'” he said.”It’s not going to be on Raditude, but Weezer will release it sometime in the near future.”

Weezer is also contemplating a reissue of 1996’s Pinkerton, complete with unheard outtakes and demos. “There’s a lot of material, but I enjoy the process of going through it all and remembering what that time was like,” said Cuomo.

We can only hope that reviewing this older material reminds the band that every song needn’t be a slap-on-the-forehead joke.