Tweedy and Co. also invite Yo La Tengo onstage during their performance at Brooklyn's minor league baseball park. Click here for a review! 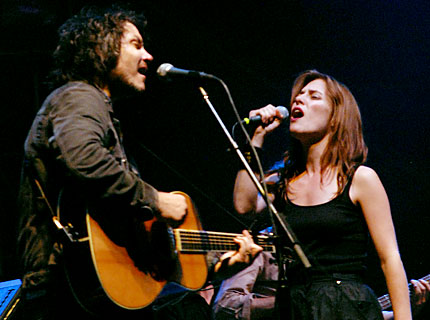 Wilco’s live shows are predictably superb. But even by that dependable standard, the Chicago band’s performance at ConeyIsland’s KeySpan Ballpark (home of the rookie league Brooklyn Cyclones!) Monday night was on a higher level — and featured an a all-star jam with Feist, Grizzly’sEd Droste, and Yo La Tengo!

The set started with “Wilco (The Song),” the band’s celebration of themselves off their strong new release, Wilco (the album).The six-piece followed with “I Am Trying to Break Your Heart,” a multi-part love song from 2002’s revered Yankee Hotel Foxtrot.

The band — a super-tight group of road dogs who’ve played more than a hundred gigs since last fall — flawlessly shifted between the extremes of their catalogue, hammering out the prog-rock storm ofSky Blue Sky’s “Impossible Germany” one minute and Foxtrot’s acoustic sing-along “Jesus, Etc.” the next. The new songs were delivered with a comfortable grace, too — even “Bull Black Nova,” a frantic story about a man who just murdered his girlfriend.

The crowd, a well boozed group of predominantly late-20s, early-to-mid-30s new (or soon-to-be) dads and their wives/girlfriends/bros… some with offspring in tow. Wilco may be the coolest band in the dad-rock lexicon. Their qualifications check out. Agreeable classic rock riffs? Check. Neil young lineage? Check. Artistic viability? Check. Songs about hating to do the dishes and mowing the lawn? Check. Songs for cuddling with the lady beneath the stars? Check. Hell, Tweedy, the uber dad, even led the crowd in “Take Me Out to the Ball Game.” If he could have given everyone a ride home in his mini-van after the show, he would have.

But dad rock isn’t just for dads. It’s for Canadian songstress Feist and Brooklyn hip-young-thing Ed Droste of Grizzly Bear, too. Feist joined Wilco on “You And I,” an acoustic duet about the hardships of marriage off the band’s latest album. Next Droste joined on backup vocals on “California Stars” and “You Never Know,” taking the mic with Feist stage left, nervously dancing about.

Yo La Tengo’s Ira Kaplan (also a dad) joined on the pulsing jam “Spiders (Kidsmoke),” which built to crescendo with Cline, Tweedy, Sansone, and Kaplan on guitar, and Droste and Feist in the back clanging on drums and cymbals.

And just when it seemed to be over (Cyclones mascot Sandy the Seagull even came onstage to dance), the show went into unexpected overtime with a second encore. “We wanted to play another song,” said Tweedy. “It was written just a few blocks from here.”

The six-piece then ripped into “Hoodoo Voodoo,” a country boogie featuring Tweedy’s raspy vocals and dueling southern guitar riffs. It was an excellent display of showmanship — even for a band already known for their spot-on live performances. And it became the topic of discussion as thousands of fans piled into New York City’s version of the mini-van — the subway — and headed home.

William Goodman
Tags: feist, Grizzly Bear, We Were There, wilco