Panic at the Disco singer unplugs, unveils new song, and crushes on Megan Fox at his first post-split performance. 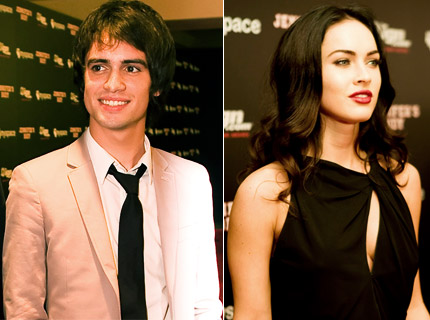 “Keep drinking, get really wasted,” the Panic at the Disco frontman advised the crowd on the rooftop Kin Lounge at the Manchester Grand Hyatt before launching into “Nine in the Afternoon.” “Otherwise this isn’t going to be any fun.”

Urie remained humbly playful throughout his three-song solo acoustic set at this party to raise awareness of the upcoming Fox-starring, Diablo Cody-scripted horror flick, Jennifer’s Body. But while a dozen or so fans gazed up adoringly at the singer, most of the other 200-odd schmoozers in the crowd seemed a bit more focused on the drinking and getting wasted aspect of the evening. They occasionally glanced over towards the stage in curiosity, possibly to see if Urie was wearing a Tron costume. He was not.

“So, when do the DJs start back up again?” asked one onlooker just before Urie launched into “New Perspective,” a new Panic song from the movie’s soundtrack. It’d be easy to get analytical about the song’s title considering this was his first live performance since Panic guitarist-songwriter Ryan Ross and bassist Jon Walker split from the group a few weeks ago, but the song’s lyrics are about falling in love, not out of it.

Plus, if talking to Urie just before he took the stage revealed anything, it was that lust, not intraband politics, was on his mind. “Hey, if you happen to get in a word in with Megan Fox, tell her I say what’s up,” he said.

Across the party, past the throngs and near the pool, the Transformers 2 star was sequestered in her own cabana, surrounded by half a dozen security guards armed with nerd repellent.

Urie got through his short set just fine, despite the crowd’s indifference. As a guitarist, Urie makes a fine singer. But he won points for gusto, as if he were performing the songs for the first time in a coffeehouse. He ended his set with a rough-and-tumble version of “I Write Sins Not Tragedies” then shouted, “Someone buy me a shot. I need it. I’m poor.”

In less than two weeks, he and drummer Spencer Smith will be playing arenas once again opening up for blink-182. They’ve also started working on new material and plan to have an album out by next year. However, Urie says hardcore Panic fans shouldn’t fear the music will be a huge departure now that the band has lost its principal songwriter.

“We’ve always been fans of pop music, rock, anything we could get our hands on, and we’ve always tried to make it our own thing,” he said. “There’s gong to be a lot of slower songs, as well as some uptempo songs you might be able to dance to. Maybe a mix between the first and second record.”

When asked what kind of music he and Smith have had their hands on lately, Urie didn’t miss a beat. “We’ve been listening to a lot of Paul Simon. But you know, it ranges from the Beatles to Sublime to Kanye West to Imogen Heap.”

“No,” he laughed. “We used it once on our first record but we’re not gonna get into auto-tune. Like Jay-Z says, death to auto-tune.”

Seth Combs
Tags: brendan urie, megan fox, panic at the disco, We Were There