This indie orchestra gives classical music a jolt of energy. Download their collaboration with Thao Nguyen! 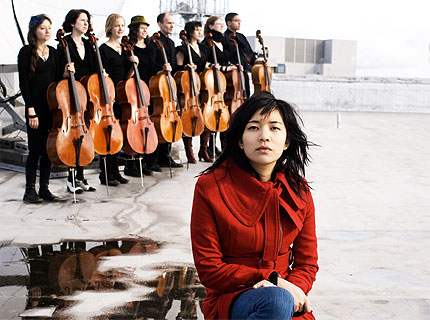 The Portland Cello Project is a rotating cast of 8-16 classically trained cellists known for mixing Salt ‘n’ Pepa with Bach and providing the lush backdrop for some of indie rock’s most compelling voices. They’ve performed cello covers of Britney Spears’ “Toxic” and Outkast’s “Hey Ya,” and teamed up with the Dandy Warhols, folk singer Laura Gibson, and members of the Decemberists, among others, to create rich, layered music that is anything but classical.

The fruits of their most recent collaboration — with Thao Nguyen of Thao With the Get Down Stay Down and fellow Portlander Justin Power — can be heard on The Thao and Justin Power Sessions (Kill Rock Stars), out now. The album features new, cello-ified renditions of Thao and Justin’s songs, as well as covers of the tango classic “Por Una Cabeza” and heavy metal band Pantera’s “Mouth for War.”

One of the album’s standout tracks is “Tallymarks,” which originally appeared on Thao with the Get Down Stay Down’s 2008 album We Brave Bee Stings And All. On Power Sessions, the song — with its clever lyrics and pretty, husky vocals — is a Regina Spektor-esque ballad, backed by cello and acoustic guitar.

Download “Tallymarks” below. Then let us know what you think of this new take on chamber music in the comments section below!